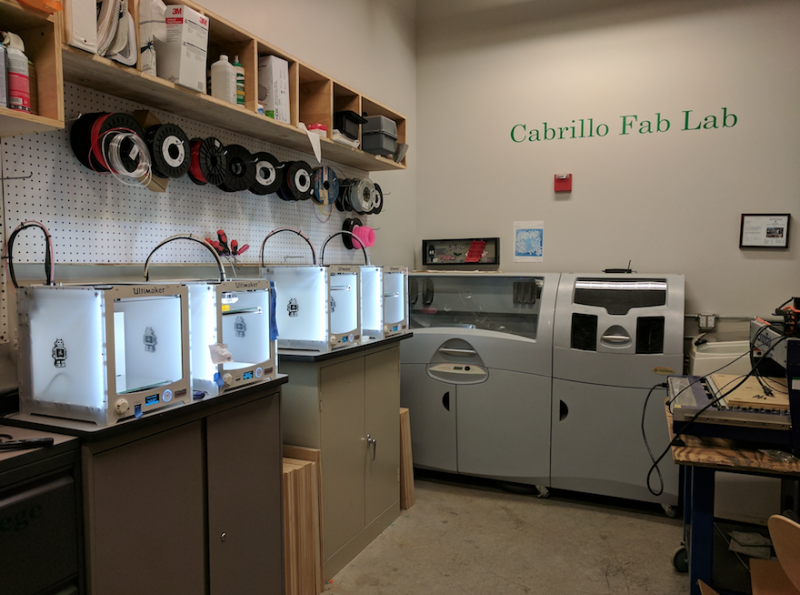 (Photo above: A scene from the Cabrillo College Fab Lab. The lab is equipped with state of the art technology to assist students with learning skills for 3D printing and scanning, laser cutting and engraving, vinyl cutting, and CNC router capabilities. Contributed.)

[Editor’s note: This article is first in a 2-part series about the Cabrillo College Fab Lab. Read the second part here.]

How the Cabrillo Fab Lab came to be 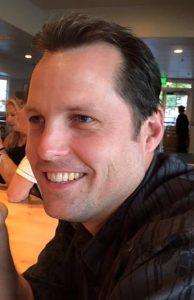 When I attended Cabrillo College, I was one of many students who thrived in the art department as a result of the nurturing environment and quality instruction I received in classical techniques. I was a student at two universities and several community colleges in my 11 year pursuit of an MFA degree, and Cabrillo’s fine arts faculty are some of the most talented instructors I have had. They were able to demonstrate their commitment to the community by offering quality art instruction – while working in sub-par studio classrooms.

I returned to Cabrillo in 2014 to interview for an adjunct instructor position in the ceramics department. The facilities at the Visual, Applied, and Performing Arts (VAPA) complex were new to me and so was Dr. John Graulty, the Dean of VAPA. During my interview, I demonstrated a technique to apply texture to clay using a laser-cut stencil. This small portion of my presentation sparked Dr. Graulty’s and other committee members’ interest and opened up a new and exciting direction for the Cabrillo Studio Arts Department: digital fabrication.

I joined the adjunct pool and waited. Not satisfied with the notion of sitting on my hands for the better part of a year waiting to teach, I began working across disciplines with faculty outside of VAPA to create a series of digital fabrication courses for the art department. My first step was identifying other departments that were already using 3D printing and CAD/CAM technology, which naturally led me to engineering. I discovered that Cabrillo already had excellent software courses in the E-tech department, so I focused my curriculum on the hardware and hands-on skills that would complement existing courses. I submitted my curriculum for approval, a process that takes two years, and set out to acquire the necessary equipment while Dr. Graulty began the painful process of finding space on campus.

Not a farfetched idea

The Cabrillo College Foundation was our first donor and generously offered to purchase our first Ultimaker 3D printer. This donation was the most important one we received in the program’s first year because it gave me confidence that building a Fab Lab (fabrication laboratory) at Cabrillo was not a farfetched idea; it demonstrated that there was support for the project within Cabrillo; and it lifted me up at the start when I was struggling with the countless hours of volunteered time and energy. My first semester in the adjunct pool was tough, but I made it through and remained motivated because of the Cabrillo College Foundation’s generosity.

A critical connection with MakersFactory

Near the end of that first year, Cabrillo College President Laurel Jones connected John Graulty with Dave Britton the owner of a local company called MakersFactory. This turned out to be another critically important moment for the Cabrillo Fab Lab.

I had been out of state for the previous five years and was not familiar with MakersFactory. At that time, they were operating out of the Cruzio building and were looking for a more suitable location for laser fabrication. VAPA needed access to a laser in order to offer the classes I was proposing. In the end MakersFactory ended up leasing space on the Cabrillo Campus and ultimately donated over $40K worth of equipment to Cabrillo, including an Epilog laser cutter and ZCorp 3D printers.

Mary Talpas, then project manager at MakersFactory, nearly convinced me to divert my attention from VAPA and take a job as a consultant for MakersFactory. I remained focused on Cabrillo but Mary’s enthusiasm and passion for learning was inspiring and conversations with her led me to look outside the college to fill the needs of the community. Mary and I later formed Makology to help K-12 schools incorporate maker skills into their curriculum.

Quietly cheering for our success

In the second year, I went back to the Cabrillo College Foundation and asked for twice as much money to purchase a desktop computer numerical control (CNC) router. It was the last piece of equipment needed to launch the Cabrillo Fab Lab program. I was very anxious, concerned that I was asking for too much too quickly. Dr. Graulty once again offered support and encouragement, letting me know that the effort I had put forth was recognized and that the Foundation had been following our progress and quietly cheering for our success. They cheered much louder when they awarded us enough to purchase a new Shopbot CNC router.

Around that time, my curriculum was approved and the Fab Lab was nearly up and running. The first official Fab Lab course, Art 95A Survey of Digital Fabrication in the Studio Arts, was scheduled for the 2016 fall semester. In order to test out my teaching materials and identify opportunities for improvement, I began offering workshops to the public through Cabrillo Extension and free trainings to Cabrillo faculty through subsidies from Cabrillo College Foundation. The faculty training sessions allowed faculty the opportunity to learn about 3D printing, laser cutting, vinyl cutting, and/or operating a CNC router.

With a fully functional Fab Lab and one of the only community colleges in the state with transferable courses dedicated to hands on maker skills, we were ready to submit a letter of interest for the California Community College Makerspace Initiative that came out of the Chancellor’s Office.

We received a planning grant that we are using to host an all-day Cabrillo College Makerspace Plan-A-thon on April 21, 2017. This event will help us to determine what curriculum and maker skills will best aid our local businesses, K-16 partners, Cabrillo faculty and students, and other stakeholders in our extended maker ecosystem.

If we are awarded funding in the next phase of the Chancellor’s Office initiative ($17M, State-wide), further funding from this initiative, we will be able to help subsidize paid student interns working at local business operating this technology and to expand substantially the Fab Lab and makerspace program at Cabrillo in the coming year. We will be submitting our CCC Makerspace implementation plan in June.

I taught the first offering of ART 95A this past fall and it couldn’t have gone better. After dedicating so much time and energy to this project, I am elated by the feedback from students and community members. Many students have started to volunteer their time as well. Special thanks are due to Mary Talpas, Laureen Wong, Mary Govarrs and Dave Castro, whose efforts have taken some of the many Fab Lab operational roles off my plate. They also formed the Cabrillo College Fab Lab Club which will be responsible for coordinating our involvement at the Santa Cruz Mini Maker Faire and the Bay Area Maker Faire. In previous years, these tasks were primarily coordinated and funded by myself and Jill Gallo in Cabrillo Extension.

In May, I will be traveling to Duke University to speak about some of the unique aspects of the Cabrillo College Maker Skills Program, which has generated national recognition. I will also be participating in the Arts, Tech & Education panel discussion, at the Santa Cruz Museum of Art & History on May 10, 2017.

The Cabrillo College Fab Lab Club is developing exciting events and activities, and fostering new collaborative projects at the college and in the community. Examples of this include two projects which offer opportunities for students to design and fabricate prosthetics: one for children and the other for veterans. This is cross-disciplinary collaboration with Jo-Ann Panzardi and Cabrillo engineering clubs where attendants design and build prosthetics for children. Dave Castro and Chuck Woodson are working on developing workshops at Cabrillo, subsidized through the Veterans Association, which will be offered to veterans.

If you’d like to learn more about the Cabrillo Fab Lab, please visit: http://cabrillo.edu/~pmcnett/, and join us at one of our upcoming events: