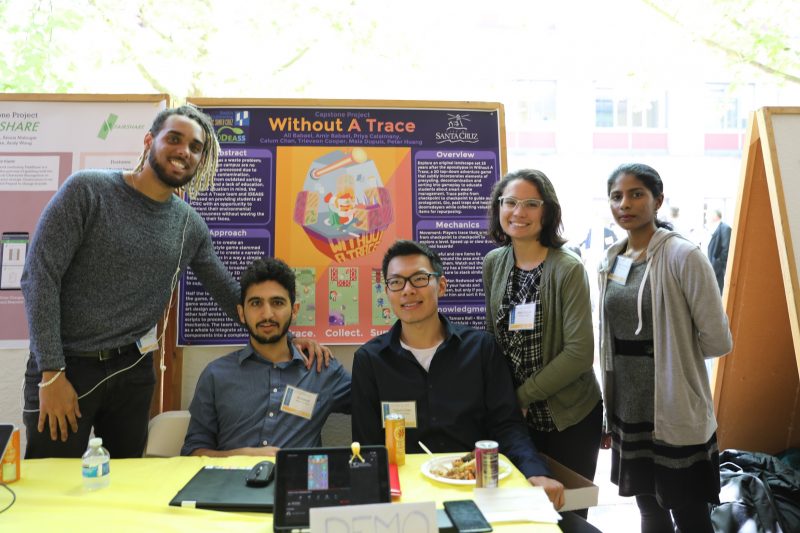 [Editor’s note: This is the fourth in a five-part series highlighting Senior Design Projects at UC Santa Cruz.]

(Photo above: Without A Trace team members assembled around their
presentation poster. Contributed)

Without A Trace: Teaching Californians how to recycle properly

Recycling has become a big problem in California: “The stuff inside your blue bin used to be worth about 65 cents,” wrote Lisa M. Krieger for the San Jose Mercury News. “Now it costs 47 cents to haul it away and find someone who wants it.” China used to buy Califiornian recycling in bulk but our waste doesn’t meet their stringent standards anymore.

Enter Without A Trace, a game created by a team of UC Santa Cruz students that is teaching Californians how to recycle properly. “The idea originated from the Santa Cruz recycling center,” said team member Maia Dupuis, a junior double majoring in Computer Game Design and Computer Science. “China no longer accepts our recyclables because of the level of contamination, and we figured a game app you could play on your phone might help people learn how to recycle properly.”

The Without A Trace team needed an idea that would wend narrative with a repetitive activity that would reinforce the lessons they were trying to impart. The team decided an exploration-style game would function best.

“Without A Trace is an educational recycling game that’s meant to be played on mobile,” Dupuis explained. “It’s a mobile app… you play Gio who lives in a post-apocalyptic world that looks a lot like Santa Cruz and you scavenge for items while avoiding traps and enemies while going back to your settlement to recycle them and continue to grow.”

You move through the post-apocalyptic tracing paths from checkpoint to checkpoint, sneaking past traps and slaying guardians while collecting valuable items for repurposing. Along the way you glean plenty of useful recycling advice. Especially when you carry or sell items you’ve found: To save inventory space you must keep similar items (such as varieties of plastics) stacked together and when you take those items to Old Man Redwood for repurposing, he’ll only accept them if you sort through them first.

To create the game they used a technique called MDA – Mechanics, Dynamics and Aesthetics. “MDA stands for Mechanics Dynamics Aesthetics which is kind of where game development is, which if you keep them in mind really help the structure and integrity of your game,” Dupuis said.

They created the game using a popular game-making software called Unity 3D, writing scripts in C# to process the game’s mechanics. Among the most challenging things about the game was trying to get the version control / software repository service Github working correctly with their Unity software.

The team is testing the game with game design capstone students and hoping to release the game into the wild very soon! In the meantime here’s their website: https://withoutatracegame.com/about/

Watch Maia Dupuis describe how her dual major helped prepare her to become scrum master in her senior design project, a game called Without A Trace: