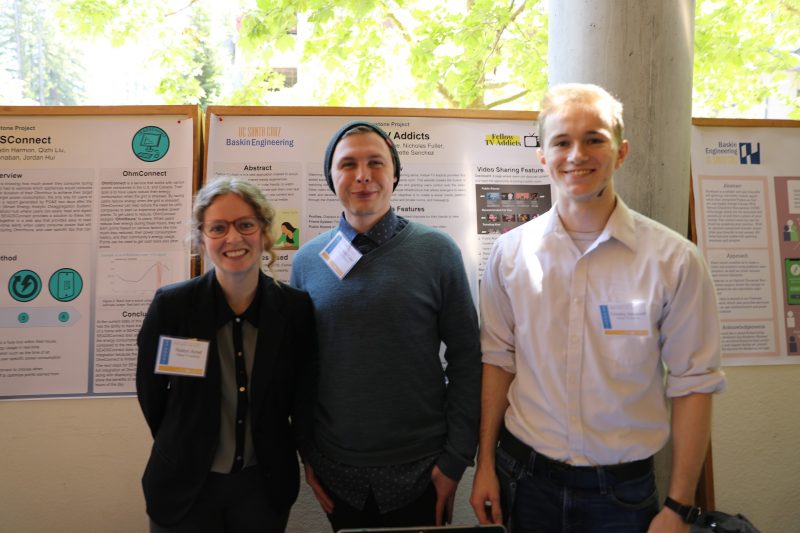 [Editor’s note: This is the second in a five-part series highlighting Senior Design Projects at UC Santa Cruz.]

Counting down on the phone before you hit the play button together… The shared streaming media experience has to be one of the strangest, most poignant, frustrating parts of a modern long distance relationship.

“When I was a kid,” Fellow TV Addict Project Leader Roslyn Axtell said, “my dad was often out of town, and the way we got to know each other was by watching TV together.” Axtell would Skype her father, they’d queue up a streaming site, count down from three and then press play simultaneously. It was a frustrating process: you can never really hit the play at the same time and even if you could, lags and buffering knocks you out of sync.

“[Synchronized TV watching] creates the illusion that you’re in the same room together,” explained Axtell. “When I’ve been in long distance relationships or I’ve wanted to watch videos with my dad, the current process is: I’ll Skype them, I’ll queue up the streaming video site and we’ll say 1-2-3 go! I wanted an application that combines it all in one… so if you’re in a room with your friend, you can play a video and anyone in the room can play it or pause it and everyone in the room can see it… it turns a solitary experience into a shared one.”

Fellow TV Addicts is designed to facilitate those moments of shared media experience and build a community around them. Axtell has been working on the idea for almost five years. It was so compelling to her that in community college, even after missing a crucial online midterm in a programming class twice in a row, she couldn’t conceive of switching majors and letting go of her dream of perfectly synchronized television!

Axtell presented the idea to her class. “The people joining the project told me later they were interested because it was solving an actual problem and using several technologies: for example YouTube videos have free content, you can use API requests (Google’s YouTube API) to search and play videos on your own website, we’re able to use that technology to provide the content for the site … but we wanted our site to be unique… and so we decided to put an emphasis on creating a community of individuals… so now it’s more of a social media site.”

The site will have profiles and public rooms where dozens, even hundreds of people can watch television simultaneously plus a messaging application to communicate privately.

To execute the project, she recruited four fellow Computer Science students: William Lee, Nicholas Fuller, Timothy Haygood and Lizette Sanchez (although Lizette couldn’t stick around after the second quarter of her senior capstone sequence). They used a MERN Stack for scalability, popularity and documentation; the YouTube Video Player because of its ubiquity and free (albeit limited) access to the YouTube API and Socket.io, which allowed users to communicate in real-time and to synchronize video streams, and use easily organized namespaces to create rooms where clients could send data to one another.

“They helped me turn my dream into a reality,” Axtell said. “I cannot thank them enough. Lizette has phenomenal design skills, always going above and beyond what we asked for;

Will was our resident redux master, he’s one of those people who’s genuinely interested in figuring out what’s going on… he took the lead on the MERN Stack… Nicholas Fuller was our backend guru… and Tim was our Socket.io master, the heart and soul of our app, the technology that does all of our synchronization. As for me, I like to dip my toe in everything.”

There remains a lot to do on the project. One of the challenges they ran into was scalability during testing.

“There are limitations for the API we’re using,” Axtell explained. This Google’s Application Programming Interface which allows different applications to “talk to one another.” “They only allow us a certain amount of quota per day… so it will take for example three quota points to conduct a search or a hundred to upload a video… so we get 8000 points per day, and testing can eat it all up really quickly. This really limits how scalable we can be during this phase, so we’re not sure how many people we can support yet, but if we can find a way to pay for more access then… we can figure it out.”

Axtell hopes to continue working on the project after graduation. “I want to keep working on it and see how this idea can blossom into something else! For example I’d love to see this being used all over the world.”

Would you like to become a Fellow TV Addict? Go to: https://fellowtvaddicts.com/