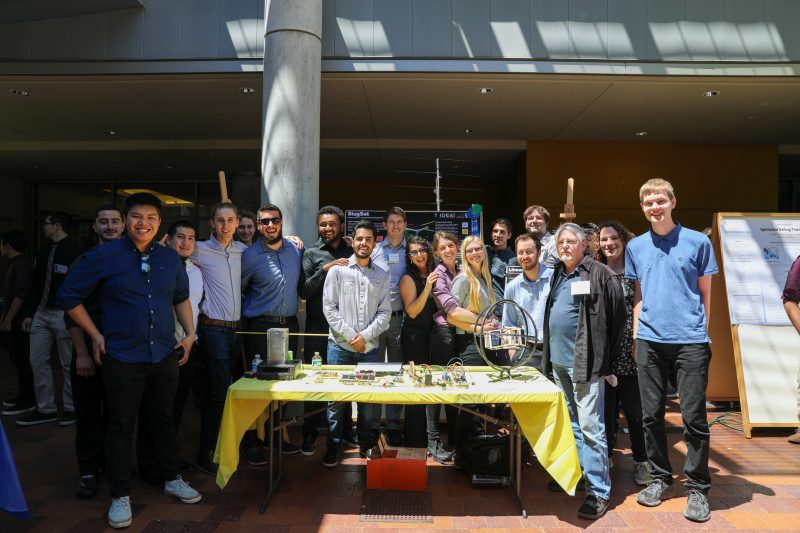 [Editor’s note: This is the third in a five-part series highlighting Senior Design Projects at UC Santa Cruz.]

Most senior engineering projects span two or three academic quarters. SlugSat is on year three of a seven-year stretch. The team is building a CubeSat, “a satellite the size and shape of a loaf of bread,” says team integration lead Natalie King. SlugSat will carry two payloads: a linear transponder for facilitating high frequency communications and a terrestrial gamma flash detector.

SlugSat is participating in the CubeSat Launch Initiative (CSLI), a program offered by the National Aeronautics and Space Administration (NASA) which provides educational institutions like UC Santa Cruz and non-profit organizations access to space during onboard launches. It’s a way to facilitate research that would never have been possible and create opportunities for student engineers.

“They want to make space available to people who aren’t satellite professionals,” SlugSat co-lead Sarah Mitchell said, “and they want to support educational endeavors and put it within reach of students like us.”

“You have to meet the criteria [for NASA to grant rocket space],” King explained. “Can it survive space? Can it survive launch? Are the odds at least in your favor that it can survive? Are you doing something interesting that benefits the scientific community? There’s a shake test and a vacuum chamber test at different temperatures to simulate space.”

SlugSat’s aims to do just that. Their dual payload will benefit the community: the linear transponder will benefit the amateur radio community (and the community at large during disasters when ham radio operators assist first responders); while the second payload, created by the Santa Cruz Institute for Particle Physics, “will be doing new scientific research,” said King.

One of the biggest challenges is making the vessel launch worthy. Now that their prototype is almost ready they’ll be able to look for sponsors. The most expensive parts are testing equipment like shake tables and vacuum chambers. Space-grade components are often hardened against radiation and made of materials like ceramic instead of plastic. SlugSat has been building connections to other universities (such as AmSat, the amateur radio satellite organization, NASA Ames, which has a CubeSat basement, Sonoma State, and Cal Poly San Luis Obispo, which has offered the use of their environmental testing equipment) in an effort to share resources and expertise.

“This year’s goal is creating a flatsat,” said Mitchell, “a first functional prototype consisting of all the subsystems laid out flat on a table, interacting with each other as a proof of concept and a test of functionality so you can then go on to worrying about space: how do you cram all these components together so they can fit?”

Another challenge they’ve faced is “focusing on the big picture,” said King. “We’ve all broken the project down into sub-teams and now we have to put it back together! You might think the biggest challenge would be something like creating a power system that can go from near zero temperatures to blazing sunlight but the larger and more
difficult challenge is to see it all together and work toward the final goal. You can always optimize after.”

“We don’t have aerospace or mechanical engineering departments here that would traditionally support a CubeSat program,” said Mitchell. “That means a lot more research from us in order to make the CubeSats happen. But we’ve been doing well! We have a good team who’re willing to go the extra mile to make things work.”

“[The research] is actually really cool,” adds King, “I assumed aerospace engineering would be all about learning how rockets work, and then we went to CalPoly and were asking questions about the make-up of our team, and they didn’t seem concerned–they said you’ve got EEs and CEs so you’ll be great. So what we learned was that a lot of aerospace engineering was about getting teams to work on specs together.”

The great thing about not having aerospace and mechanical engineering on campus is that the CubeSat team can use the project as a way to get involved in the aerospace industry. “While managing such a large project can be a huge challenge, I think we’ve been doing a good job so far.”

“There are two parallel hierarchy systems in place,” Mitchell said. “There are subteam leads and integration leads and that gives us fewer points of contact to figure out what’s going on. Each subteam has a subteam lead and that makes it all easier to keep track of; after all, one of the biggest challenges of this project is finding a time when all 18 members can meet!”

“One of the greatest things about being on a team this large,” Mitchell said, “is that there are always places for people to get leadership skills, so it provides a lot more opportunities to develop the soft skills that you need for jobs after school.”

In year three they’ve made tremendous progress; they have a great, working, attitude control system, a really good big picture plan for the next four years, and tons of momentum for next year’s project.