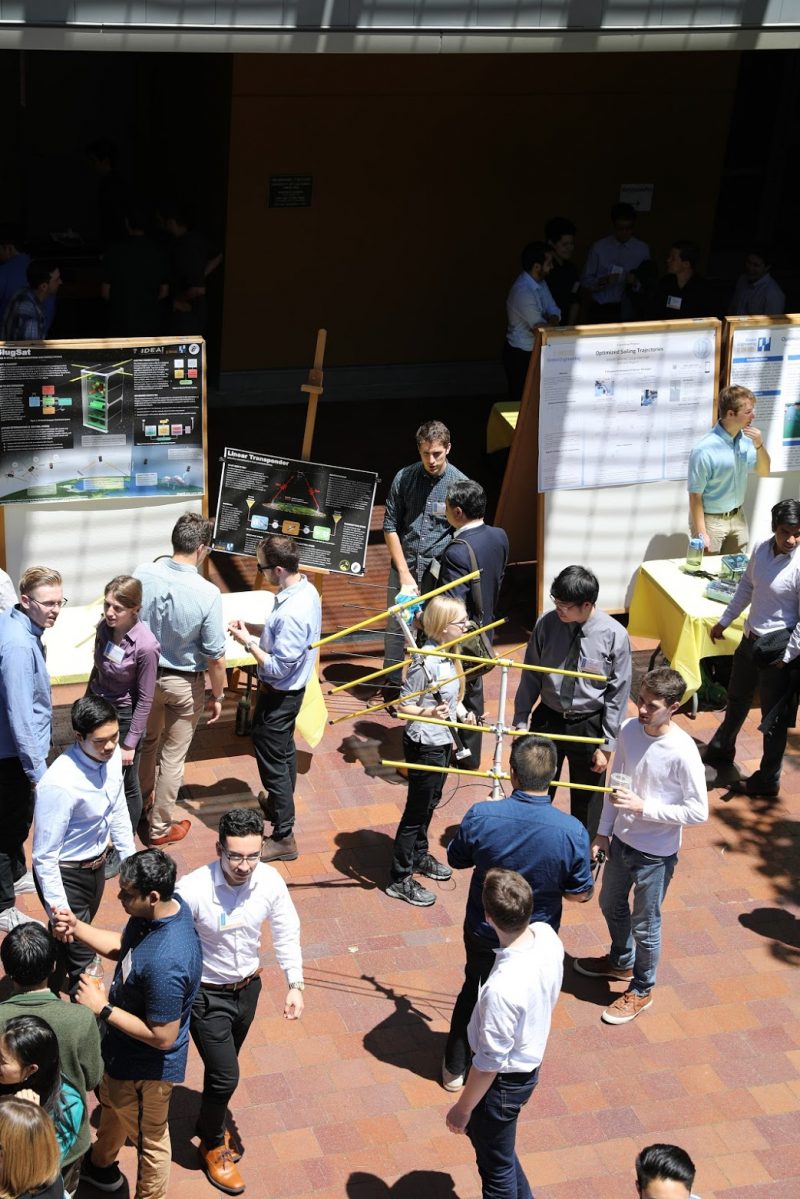 [Editor’s note: This summary is the last article in a five-part series highlighting Senior Design Projects at UC Santa Cruz.]

(Photo above: Some of the amazing undergraduate engineering projects created for Partners Day 2019 at UC Santa Cruz. Contributed)

The senior design projects program at the University of California, Santa Cruz Baskin School of Engineering begin with a single voice. Students (and their professors, who draw from a pool that includes sponsored senior projects pitchtheir ideas to the rest of the class. Students join the teams that appeal to them the most.

Choosing a leader takes a little more time. Sometimes they earn their positions: Maia Dupuis became Scrum Master for the Without a Trace team from a combination of skills and by inspiring trust in her teammates.

“I was the only one on my team who was a game designer, the only one who knew anything about MDA [mechanics, dynamics, aesthetics] approach to game-development which they teach here and really helps preserve the structure and integrity of the game,” Dupuis said.

As a junior, and one of only two women on the team, Dupuis had initial doubts about leading a team of seven, but the demands of the project forced her to set those worries aside.

“The majority of the team are men and I love them very much. They’ve become wonderful friends who are turning into being very much like brothers and this really surprised me because as one of the younger members in the group they actually respect me a lot for my insight and now as scrum master–which is a fancy term for a project manager–most of the stuff we do gets run past me and I organize and make a lot of the decisions. I’m really grateful to have this experience.”

Read about Without A Trace.

“I had an interesting experience for the senior capstone project. Most students join or create a project during the fall quarter of their senior year, but I found this project during my junior year. ; myself and another student [Sarah Mitchell] were in the amateur radio club when we heard about the project, and we stuck around, learned what we could and decided we would pitch the project again and be the co-leads of the third year of the project,” King said.

Having a management role has allowed King to grow in unexpected ways. “I’d always seen myself as more of an introvert,” she said, “and management can be scary. You’re with a team of peers, so you can’t force anyone to do anything; nor should you ever–the beauty of the project is getting all these students with different skills coming together to build something greater than themselves. You have to go into uncharted territory and figure out what’s best, and then convince both the students around you and the professors mentoring you that what you’ve chosen is the best, which is a challenge in itself.”

Sometimes leaders have a vision from the very beginning. Roslyn Axtell dreamed about creating her Fellow TV Addicts application for years before beginning her studies at UCSC.

“I had this idea [for an application that would allow viewers in remote locations to watch TV simultaneously] for the last six years,” Axtell said. “It’s the reason why I decided to continue doing computer science and why I continued in this direction: I had to build it. I can’t thank my team members enough for all the help they’ve given me.”

Axtell refined her managerial skills by taking a class in leadership.

“Taking a leadership class was so great,” Axtell said. “It gave me so much confidence and really helped me be a better product owner… it’s so amazing, something you’ve been thinking about for five years and bringing it to life… I feel like I belong in this field because I’m working on something I feel passionate about… I might be feeling sad or stressed and then I meet with my fellow TV team and I come away just skipping because of the progress we’re making and the ideas they’ve come up with I never would have thought of.”

Marius-Paul Dumitrean also had a vision for his project, but his was a reaction to a very real problem. His daycare center was being threatened with privatization and Dumitrean couldn’t attend the protest because it would mean missing school, work and potentially losing clients and income. He wondered whether there might be a way to pay someone to take his place — and that was the genesis of UpVoice.

Dumitrean proposed it to his class. His advisor Computer Science and Engineering Lecturer Richard Jullig was hesitant. After all Dumitrean is a little different than the average undergraduate. He of leadership and relentless energy: launching successful start-ups and a thirteen-year career designing semiconductor circuitry.

“It took a lot to convince [Jullig],” Dumitrean said. “I brought up my experience with daycare, brought up the right to protest versus getting away from work when you’re responsible for a product you can’t run away from, even how I grew up in Romania and hid from the gunshots when Ceascescu was executed on Christmas Eve 1989 and how in some ways it was freer than the States are now because there’s a tradition of protest. Finally he relented. Jullig told my team that they could always use the app to hire protestors (against me) on their behalf!”