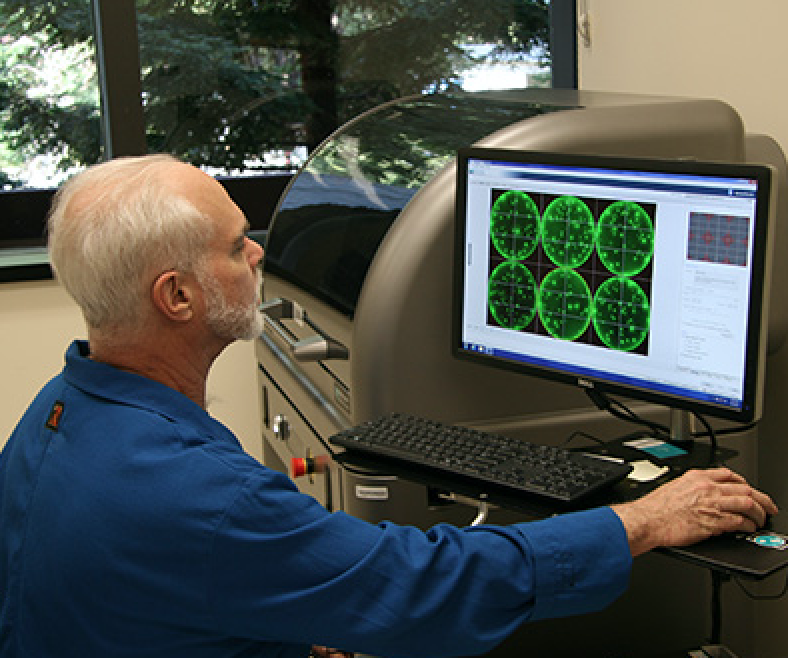 (Photo above: Using robotics, UCSC researchers automated the process of screening tens of thousands of cells to find cell lines that produce large amounts of the desired protein for an HIV vaccine. Credit: Tim Stephens)

Technical advances in vaccine production should shorten the time to clinical trials, breaking the logjam of promising new candidate vaccines waiting to be tested

Research on HIV over the past decade has led to many promising ideas for vaccines to prevent infection by the AIDS virus, but very few candidate vaccines have been tested in clinical trials. One reason for this is the technical difficulty of manufacturing vaccines based on the envelope proteins of the virus, according to Phil Berman, who led development of a major component of the only vaccine to have shown any efficacy against HIV in a clinical trial.

Berman, the Baskin Professor of Biomolecular Engineering at UC Santa Cruz, has now developed new methods for the production of HIV vaccines. His approach solves major technical problems which have bedeviled the field. Berman described the new methods, and the candidate vaccines his lab has produced, in a talk at a conference on HIV vaccines held last week in Canada (“Emerging Technologies in Vaccine Discovery and Development,” a joint meeting with “Progress and Pathways Toward an Effective HIV Vaccine,” January 28 to February 1 in Banff, Alberta, part of the Keystone Symposia Global Health Series).

“Dozens of interesting vaccine candidates have been described, but most have not been tested in humans because it has not previously been possible to manufacture them affordably and in a timely fashion,” Berman said. “The technology we developed should break the logjam in HIV vaccine development, because it tremendously shortens the time, improves the yield, and lowers the cost.”

Berman’s lab was able to use robotics to shorten the time required to produce stable cell lines, needed to make the proteins for a vaccine, while at the same time greatly increasing how much of the protein the cell lines can produce. The improved yield makes it possible to reduce the size of the bioreactor needed to make vaccine for large clinical trials–from 2,000- to 10,000-liter vessels to 50- or 100-liter vessels–resulting in tremendous savings in the equipment required and cost of materials. In addition, Berman’s lab was able to create cell lines that make HIV envelope proteins with the right kind of carbohydrate components (called glycans) needed for an effective immune response.

“The carbohydrates attached to the protein are really important, something no one realized until recently,” Berman said. “The conventional way of making these envelope protein vaccines incorporated the wrong kind of carbohydrates. We now know that destroyed many of the important antigenic sites recognized by protective antibodies.”

Cell lines derived from Chinese hamster ovary (CHO) cells are the industry standard used to produce complex recombinant proteins for therapeutic use. These cells are also useful for the production of HIV vaccines. The gene for the desired protein is transferred into CHO cells in a process called transfection, and tens of thousands of transfected cells are screened to find the few rare cells that produce large amounts of the protein. The best cell lines are grown in large batches, in a process similar to yeast fermentation for making beer, and the proteins are then isolated and purified.

Berman’s lab developed a new robotic method to isolate high-producing cell lines making HIV envelope proteins. This shortened the time required to produce stable cell lines from 18 to 24 months to just 2 or 3 months, while increasing yields by a factor of 100 to 200. Those improvements are in comparison with Berman’s previous experience creating the AIDSVAX vaccine, first at Genentech and then at VaxGen.

AIDSVAX was one component of an experimental vaccine regimen used in a large-scale clinical trial known as RV144, which showed 31 percent efficacy in preventing new HIV infections. The RV144 results showed that protection was correlated with antibodies to a certain segment of an HIV envelope protein called gp120. Other research, however, revealed that many of the most potent antibodies (broadly neutralizing antibodies capable of neutralizing many different strains of HIV) actually recognize the carbohydrate components (glycans) attached to gp120.

So he and graduate student Gabriel Byrne set out to create a cell line that can produce the unusual glycans found on HIV envelope proteins rather than the complex glycans CHO cells normally produce. This was made possible by the powerful new gene editing technology known as CRISPR/Cas9. Berman’s lab used CRISPR to create a new cell line they called MGAT CHO, which produces proteins lacking complex glycans containing sialic acid and enriched for the simple “high mannose” type found on HIV envelope proteins. An unexpected benefit of this new cell line was that it enabled a simpler, less expensive process for recovering and purifying the proteins.

“People used to think carbohydrates are not immunogenic, but HIV turns everything on its head, and it turns out that the most important antibodies are directed to this unusual carbohydrate,” Berman said. “We can now make vaccines with it for the first time, and we’ve created an improved version of the vaccine used in the RV144 trial. Our hope is that it will bring the efficacy up from 31 percent to greater than 50 percent, the level likely required for product registration.”

Berman’s lab currently has two cell lines he said are ready to start producing vaccines on a large scale. He is now looking for partners and funding to bring them into clinical trials. One vaccine is an improved version of AIDSVAX that incorporates the right kind of glycans. The other is made from a strain of the virus called Clade C that is widespread in Southern Africa and India and accounts for the majority of new HIV infections worldwide.

Researchers have continued to use the AIDSVAX vaccine in clinical studies because it has been so hard to make new HIV vaccines, Berman said, noting that there have been 14 such studies since the RV144 results were released in 2009. “They’re still using that same old vaccine we made in the early 1990s. Although the stability and safety of the product is testament to the quality of the vaccine we made, new vaccines are required that take advantage of all that we have learned since that time,” he said. “It just emphasizes the need to find a more efficient way to make an HIV vaccine.”

In addition to Berman’s talk, several other members of his lab presented details of their methods and findings at the conference. Berman said they expect to publish their findings in several papers later this year. This research was funded by major grants from the National Institute of Allergy and Infectious Diseases at the National Institutes of Health.