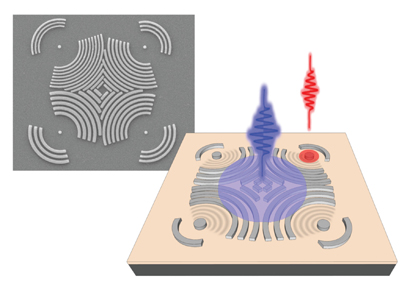 (Image above: Optical analysis of nanomagnets is achieved by directing a laser pulse at gratings designed to generate surface acoustic waves and focus the vibrational energy of the waves on individual nanomagnets. Credit: Source: Applied Physics Letters, May 26, 2020)

Data storage devices and other emerging technologies use magnetic elements smaller than 100 nanometers, but studying their magnetization dynamics can be a challenge

The performance of magnetic storage and memory devices depends on the magnetization dynamics of nanometer-scale magnetic elements called nanomagnets. Researchers at UC Santa Cruz have developed a new optical technique that enables efficient analysis of single nanomagnets as small as 75 nanometers in diameter, enabling them to extract critical information for optimizing device performance.

“It’s a much more efficient method to get critical device parameters for magnetic memory and other applications,” said electrical engineer Holger Schmidt, the Kapany Professor of Optoelectronics at UC Santa Cruz.

Schmidt and first author Wei-Gang Yang, a postdoctoral researcher in his lab, reported their results in a paper published in Applied Physics Letters as the cover article of the May 26 issue.

The traditional optical technique Schmidt’s lab has employed to study these materials uses a short laser pulse to knock the nanomagnet out of its equilibrium state, which allows researchers to extract information about the magnet’s properties as it returns to its normal state. With smaller nanomagnets, however, this approach becomes very inefficient as the optical signal is reduced and more difficult to pick up.

In the new approach, instead of directly exciting the nanomagnet, the laser pulse shines on an array of tiny bars that form a grating, causing them to vibrate and generate waves in the material called surface acoustic waves. By designing gratings with curved bars, Yang and Schmidt were able to focus the vibrational energy of the waves to converge on the location of the nanomagnet. The surface acoustic waves drive magnetic oscillations in the nanomagnet at the same frequency as the waves.

“With the same laser power, we can now get ten times more signal, allowing us to see much smaller nanomagnets,” Schmidt said. “We were able to go down to 75 nanometers, which is much more relevant to the scale of nanomagnets that are being used in devices.”

The researchers also developed a grating design that generates waves in four different directions and at different frequencies from a single optical pulse, enabling them to excite the magnetization dynamics of four individual nanomagnets at different frequencies, ranging from 7 to 10 gigahertz. Nanomagnetic oscillators are important components in many emerging “spintronic” technologies.

“This is an interesting way to get these microwave oscillations going, and it’s something we’d like to pursue further,” Schmidt said.

This work was supported by the National Science Foundation.