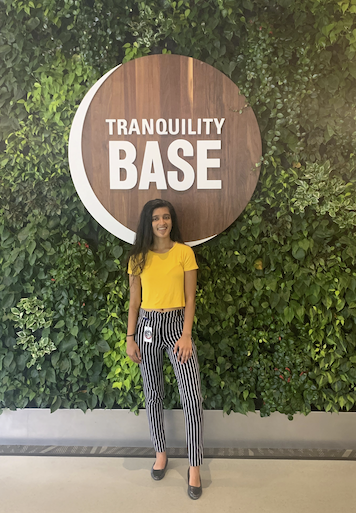 (Photo above: Ruchi Gupta is an intern at Poly this summer.  She is standing at the Poly Cafe. Contributed)

We all know the function of headsets is to provide a way of listening to our music, podcasts, videos, basically anything that has audio. We even may use it to avoid human interaction, because if we are on our headphones it is a universal signal that we don’t want to be bothered. But I bet a lot of you don’t know the amount of work that goes into making and selling headsets that we use on the daily basis.

Once a headset is made, it is put through a series of lifespan and durability tests. A mechanical machine will pull the head set open and close as if one were removing/placing the headset on one’s head. The headsets are then thrown into a controlled temperature/humidity room. The temperatures are set to extreme variance of hot and cold. This helps test if the headsets can sustain the temperature difference at different parts of the country. The microphone attached to the headset is put through a test to see how many ups and down and at varying torque does it take before the microphone can’t stay up on its own.

The design department plays an important part in why someone would prefer a Poly headset over another company. When you buy a headset, you want it to be appealing, and comfortable to the customer wearing the headset. Depending on customer the earphone will fit a user differently. Poly has a wall of rubber ear molds that vary is shape and size, made from employees who have worked there in the past. The wall acts as the database of ears in order to create the best fit headset. A long with this comes the color of the design. The specialist will figure out which color would thrive based on what is currently trending in the marketplace. The design team gets employees of Poly to test the headsets as well.

The reason you don’t hear background noise when using Poly headsets is because of the Audio department. They work on giving you the best audio possible by testing the headsets on the noise cancellation in different environments. The headset is placed on a mannequin in a room where different variations of noises are put to test. For example, can the other person on the phone still hear you if there are a lot of other people in the room having conference calls as well? Or if you are in a windstorm can the other person hear you clearly without wind noises in the back?

Poly not only focuses on making headsets, they also provide a productive environment for their employees to work in. In order to do so, Poly started of with an open office so that other employees could interact with one another. However, that turned out to be counteractive since people would get distracted easily, employees would go move into private rooms instead. The solution to this is the habitat Soundscaping that involves closing the gap between our technology based modern life demands and nature filled human needs. Poly has placed waterfalls, plant-based scenery, and sunroofs to best allude to nature. The sound of the waterfall is actually a custom-made sound that us humans believe to be a more realistic sound for the water fall than the sound of the waterfall itself. With the touch of a button this sound can be turned on and where realize the power the sound was playing in terms of creating a noise cancellation. Once the sound was turned off you could immediately hear a woman a few seats away speak so loudly. It was so crazy to see how a small change in the environment made a huge difference.

Overall you can see how different parts of a company come together to make this product that is more than just a way for me to listen to my music. Before this internship I did not know any of this. Although learning more about headsets was not part of my intern description, it gave me a higher appreciation for the opportunity to intern here at a company like Poly.