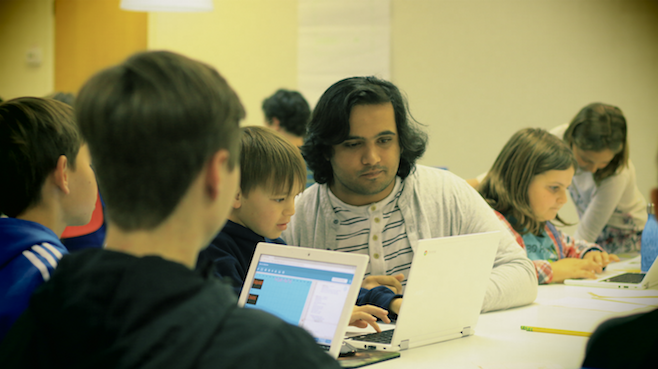 (Photo above: A student explains how he programmed his game to Code Naturally educator Sukh Singh. Contributed)

Code Naturally first incorporated in 2015 and have organized a series of code camps and after school programs. More recently, in January 2018, Code Naturally opened the first Code Center in downtown Santa Cruz.

The most recent Spring Code Camp was the first of to be held at the Code Center and the first to see an equal number of boys and girls enrolled for the majority of the camp! A part of Code Naturally’s mission is to increase diversity within computer science — they make this possible through offering scholarships to all of their events and through partnering with organizations like Cabrillo Extension to put on events such as the upcoming “Girls Code! Summer Camp”!

Code Naturally understands that programming can be intimidating. They reduce student anxiety by connecting the new concepts that students are learning to the skills and concepts that they’re already learning at school. Students love the satisfaction of applying the math and logic that they learn to creating something that they love using.

Students are utilizing the math skills that they’ve learned in their classes to plan and create projects of their own invention. Code Naturally encourages students to draw inspiration from their own life and interests. In an interview, Teo, a 6th grader explains how his animation project was originally inspired by a SpaceX youtube video about terraforming Mars. One student describes her coded illustration of a crocodile inspired by a crocodile she and her mother encountered on their trip to Cancun. The team is proud of their student’s focus and dedication that allowed their awesome ideas to come to fruition.

Despite working hard and being intensely focused on their programming projects, the students enjoyed themselves. Part of that enjoyment was due in part of the students’ freedom to partake in a project that they chose for themselves. From the interviews taken, it’s apparent that the students are passionate about their work and they’re excited to show their projects to anyone and everyone! When asked what her favorite part of the camp was, Lena, a 4th grader mentioned that she liked coding with “a free mind and creating projects”. Code Naturally aims to foster a “free mind” among all of their students and teach each and every one of them that they are capable of bringing their ideas to life through planning, hard work, and problem solving. Giving students the freedom to create what they want to create makes for passionate and happy programmers.

Code Naturally is taking their experiences from the Spring Code Camp and looking at what can be improved to make their upcoming Summer Code Camp even better! Although the Spring Code Camp was a success, Code Naturally understands that there is always room for growth. The team is already working on a new set of challenges for students to take on, new offline activities, as well as brain teasers to test student understanding of key concepts!

The Code Center is located in Downtown Santa Cruz at 181 Walnut Ave. You can learn more about Code Naturally at https://codenaturally.com