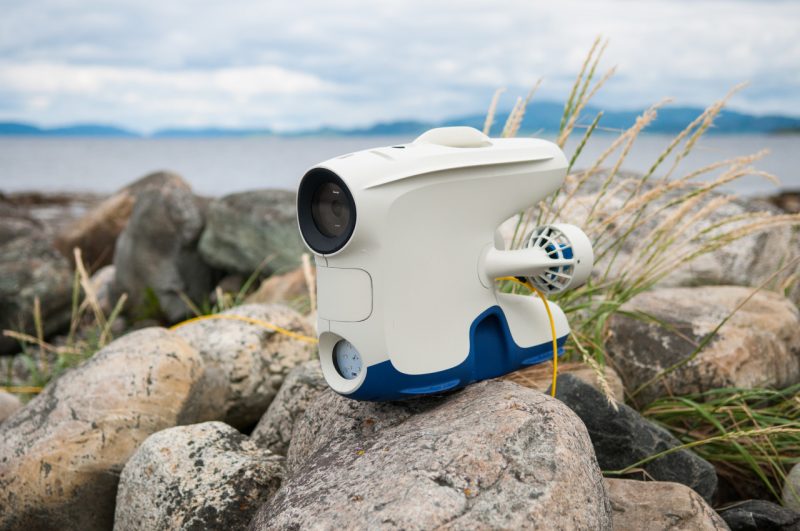 (Photo above: The Blueye Pioneer is able to dive eight times deeper than the average scuba enthusiast — up to 150 meters, below the surface of the ocean. Contributed.)

The Blueye Robotics team is launching pilots of their underwater drone in the waters of the Monterey Bay in September 2017. Join Blueye at the Santa Cruz New Tech Meetup on Thursday, September 7, 2017 for a presentation by Christine Spiten, co-founder and Chief Global Strategy Officer.

Oceans cover 70% of the planet’s surface but we know less about the sea floor than we do about the surface of Mars.

Underwater drone technology suitable for consumer- and commercial use is well on its way to opening a new, rich market. Ask the tech sector about the latest hot devices, and drones sit at the top of the “emerging product” category. Engineers and programmers are designing underwater drones that can dive deeper, maneuver well, stand up to adverse ocean conditions, and are as easy to use as a cellphone, tablet or PC.

The future of these high-performance, low-cost underwater drones resides in several areas. In addition to the business and consumer markets, underwater research will have access to technology that previously had been out of reach for their budgets.

Inexpensive robots are going under the ice in the Arctic to map algae blooms and, separately, to map litter on the ocean floor in a Norwegian fjord by the World Wildlife Fund. A fleet of low-cost drones will soon be piloted by seafaring adventurers traveling on Hurtigruten Expedition Cruise lines, as part of the guest experience on exploration expeditions to some of the world’s most remote and pristine waters.

But perhaps the broadest set of potential applications is in the consumer arena such as among boat owners, who focus as much on the technologies and entertainment features of their watercraft as on the boat itself these days. With a low-cost underwater drone on board, consumers can view sea creatures, explore shipwrecks, and be one with the fish without leaving the water’s surface. Such a device enables consumers to share video and images of their underwater adventures or store intriguing findings and information, and thus take part in a movement of citizen scientists by contributing valuable data for mapping or monitoring.

On the low end, underwater drones are already swimming into the market from crowd-funded startups or small companies on a mission to solve specific problems. For example, there are consumer submersibles that locate fish for would-be anglers, and then shoot video of the underwater struggle. A couple of young companies have developed underwater drones that zap lionfish — an invasive, non-native species rapidly destroying native species in the Atlantic — then vacuum them into a chamber.

Unmanned underwater vehicles have an established market among oceanographers, filmmakers and the military, but such devices have steep price tags starting at $20,000. Consumer submersibles at one-tenth the cost represent the biggest future for these devices, with the most successful drones being those not in the “toy” category, but that combine affordability with the rich feature set and capabilities of the pricey “professional” drones. Such promising devices will be able to address a variety of applications rather than just one, broadening their market.

These drones come equipped with cameras, which is part of the historic challenge of building such devices because sending images is much more difficult underwater than it is on land. In fact, the technical demands of making high-performance underwater drones without a high price tag has been the biggest factor limiting the use of drones by the many researchers who would love to have them, according to experts like James Bellingham, director of the Woods Hole Oceanographic Institution Center for Marine Robotics.

Just putting aerial drone technology into an underwater drone doesn’t result in success, as some Chinese manufacturers are discovering. The ocean affects hardware in many ways so designers who have some diving experience have a better perspective on currents, buoyancy, navigation and other elements. Also particularly helpful is when design teams come from a nation with a long history with the sea such as Norway—we are used to exploring it, studying it and extracting things from it.

From computers to sensors, batteries and cameras, these days manufacturing electronic devices has become cheaper because everything is digitized and prototyping is simple and fast.

When it comes to underwater cameras, light sensitivity is a big issue under water but companies are writing new algorithms that enable low latency and overcome physical limitations like low light and not displaying full colors at lower depths.

Able to dive eight times deeper than the average scuba enthusiast — up to 150 meters — the new generation of underwater drones from companies such as Blueye Robotics, lets consumers discover the unseen in the ocean while developing a greater appreciation for this hidden world. Becoming an amateur oceanographer, piloting a drone that could, say, swim after and photograph rarer fish that stay in deeper water, opens up an entire new category for social media and YouTube. But best of all, exploring the undersea environment gives people a personal stake in caring about and protecting the world’s oceans.

Just as the technological hurdles are finally being overcome, interest in the ocean among consumers is growing. People are aware of the beauty of the seas and the dangers they face due to environmental issues. Having affordable underwater robots not only engages those whose livelihood involves the ocean — underwater inspectors, aquaculture operators, scientists and others — but opens the door to consumers so they can experience and appreciate this hidden world.

Erik Dyrkoren is a passionate subsea expert, entrepreneur and a skilled mechanical engineer. As co-founder and CEO of Blueye Robotics, Erik is cementing the future of an emerging underwater drone industry that builds on world-leading ocean technology, giving non-scientists access to a user experience unlike any other underwater drone.