Q&A: Patrick Zelaya is building the bridge between agriculture and technology 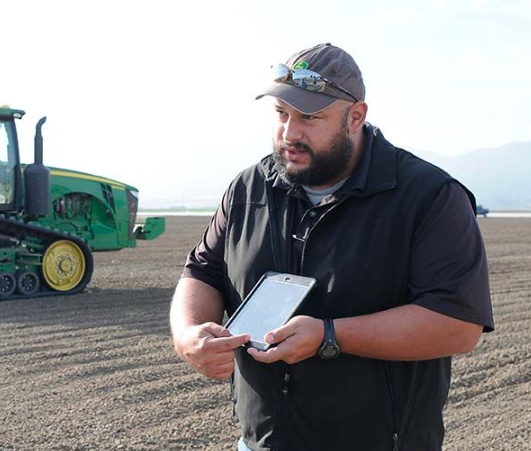 (Photo above: Patrick Zelaya is founder and CEO of HeavyConnect. Credit: Nic Coury)

During a busy week — preparing for a 500 Startups interview, participating at Food IT in Mountain View and paneling at

the Forbes AgTech Summit in Salinas — Patrick Zelaya, founder and CEO of HeavyConnect (HC) took time to share his insights about trends in agriculture and technology.

JJ: People on both sides have described the differences between the technology and agriculture industries and the need to bridge the two.

PZ: There can be a disconnect. It’s a different industry, but everybody’s identified that and taken the discussion as far as it can go. The question that follows is, how do we bring them together. That question has been asked plenty, but I don’t think it’s really been answered. I think the only way to answer it is for someone to succeed as a start up in agtech with a trajectory similar to what Silicon Valley is accustomed to, but in the agriculture industry. That’s where theory turns into reality, that’s the challenge, that’s what we’re doing. 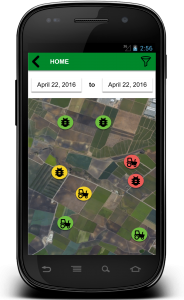 With their phones, owners, managers and employees use HeavyConnect software to instantly record and transmit information about their farming operations.

PZ: Our initial thought, because we owe so much to our community for allowing HC to grow to what it is today, is to provide an opportunity for seed investment to come from the Salinas Valley agriculture community and to invest, themselves, as stakeholders and owners of a piece of the company. We’re hoping to achieve that, but it’s a challenge. In Silicon Valley, angel groups and VC’s do this every day, they understand the process and expectations, and everything can become very boilerplate. Here, the sophistication of investor is different. We want to ensure our growth and investment is as standardized as possible. So the challenge will be raising money within the agriculture industry along with an efficiency of investment.

Outcomes for the Salinas Valley investor are more than just the return. It’s also the contributions to the improvement of our community, bringing jobs to the area, and showing that there is a technology industry where software engineers can make large salaries in an area where traditionally they haven’t. I think that that will make a substantial impact to our economy in the Salinas Valley, and on some of the challenges that we deal with in our community.

What’s interesting is that many of the sales discussions that we have in explaining what HC does, at the end of that sales discussion, after the customer says sign me up, they ask if we’re taking investors. So we’re starting to reach back to them now, saying that is a different discussion we’re having.

What that affords us, actually, is a longer growth curve. If we have our investment from Silicon Valley, I think that the growth curve will be shortened, more rapid growth, which is great. But it also introduces slightly more risk, having to grow so fast. So that’s the trade off we’re trying to balance. Ideally it’s a mix of the two.

PZ: Absolutely. The people coming out of the CS3 program understand agriculture in a way that Silicon Valley would have a very difficult time doing. And it’s natural for us here. And they have the skill set that the Silicon
Valley software engineers have. So you get the best of both worlds. It’s a huge win, including the benefit to the community.
In Silicon Valley, there’s a lot of turnover, the average tenure is 8-10 months for a software engineer there, almost like trading baseball cards. Here we won’t have that problem at all. The talent pool just keeps coming through graduating classes each year.

JJ: HeavyConnect has already mentored some of those students. At AgTech in Watsonville you mentioned having more than 30 interns at one time.

PZ: We’ve worked with almost 50 students now. It allows us to share with them the tempo and culture of our company, how a start up works, and it lets us build the relationship with them before they’re in the job pool, so there is no onboarding or learning curve, no growing pains. At first the idea was to come up with as many interesting projects as possible and see where they end up. Moon shots, as they call them up north. And we got a couple good ones out of it. Now we’re taking a more focused approach with the internship project to address a specific need. Instead of having 30 of them at one time, to focus on a single project and address a very specific market need that we know will turn out successfully.

JJ: Tracker, Scout, and Timekeeper are different tools within HeavyConnect’s SaaS line of products. Do you collaborate with growers to customize your products?

PZ: We help growers with their technology needs, instead of just delivering a product, by selling custom. Scout came about while working with Scheid, which was looking for pest scouting functionality and recording field observations. We explained that to Driscoll’s during a presentation at the farm bureau, and before we left the room we had secured a new partnership. What they wanted was a component that looked for the ripeness of the berry, so growers don’t show up at the cooler with berries that get rejected. The observations and functionality of HC Scout are identical between those two customers, but for different purposes. The customer gets to help us shape the software. We’ll continue to grow additional functionality, what we call modules, onto the HC platform.

JJ: What modules are in development now that you can share with SCTB readers?

PZ: To the field observations we’re recording, we added HC Recorder, where you record the quantity of diesel fuel you’re putting in a tractor or amount of fertilizer in a tank. The inputs are in the operation you want to track, basically things you’re writing on your hand or on a small notepad. You can log those into the phone in less time than it takes to write. We also bring them together. Timekeeper and Tracker, collecting information about where things are with the people doing the work, comes together in HC Scheduling, which will be out toward the end of the year.

JJ: Where is HeavyConnect headed, and what are you looking to do in the future?

PZ: We’re going to continue to stay on the Central Coast, get into the Central Valley later this year with the same lines of product functionality being developed right now. Like Nike and making shoes for Michael Jordan: work to make the best shoes for one guy who loves them. Then you have a product that can sell itself throughout the world.

We’ll expand throughout the country, and that’s been the historical trajectory of technology in agriculture for the last 25 years. Things come out of the Central Coast and Central Valley in California, then expand nationally, then globally. An example of that is the auto-steering tractors.

As we progress, our expansion is geographic within agriculture, but also we’re moving into adjacent industries. Our products are operational more than just specific to agriculture. Right now we take care of simplifying the operations so that farmers can farm. Further out than 2017 we’re looking to adapt HeavyConnect tools to construction, military, on-road diesel trucks, mining, oil and gas.