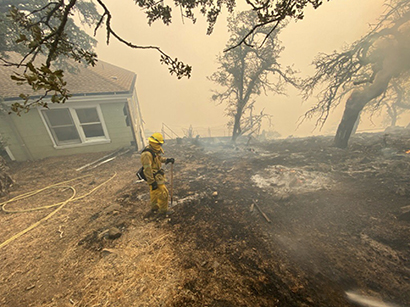 The group has designated $75,000 for the emergency support of wildfire relief efforts at Lick Observatory, where telescopes were saved but infrastructure was damaged

In the aftermath of the SCU Lightning Complex Fire, which swept across Mt. Hamilton in August, the University of California’s Lick Observatory is facing major expenses associated with repairing damaged infrastructure. Although firefighters were able to save the major structures of the observatory, including all of the telescope domes, damage to peripheral buildings and infrastructure was extensive and recovery efforts are ongoing.

Immediate support for wildfire relief efforts at Lick Observatory is now being provided by the Friends of Lick Observatory (FoLO), which has designated $75,000 for this purpose. FoLO is a membership-based organization dedicated to supporting the observatory and has long played a crucial role in providing funding and volunteers for community outreach programs and events.

Andrew Fraknoi, chair of the Board of Directors of FoLO and emeritus chair of the astronomy department at Foothill College, said the designation of funds was prompted by an urgent need to start doing emergency repairs.

“The total amount of damage is still being assessed, but in the meantime, there are things that really need to be repaired as soon as possible,” Fraknoi said.

Claire Max, director of UC Observatories and the Bachmann professor of astronomy and astrophysics at UC Santa Cruz, said practically every window was cracked in the houses of the small community of observatory employees who live on Mt. Hamilton. Aside from cracked windows, most of the residences had minimal damage, but two homes need more extensive repairs, she said.

“There are 27 people who live on the mountain, and we need them to be safe and comfortable in their homes, because we are nothing without our employees,” Max said. “The windows are all taped or boarded up now, but our worry is that winter storms could create real problems.”

Winter storms could also cause serious erosion and slides on the burned hillsides, so another priority is replacing wooden retaining walls that burned, cleaning culverts, and other erosion-control efforts to keep the hillsides intact. Two peripheral structures burned in the fire, an older residence that was not being used and a storage structure, and those require demolition and debris removal.

“The brick walls of the Barnard House are still standing, and the first strong winds blew down the chimney, so taking that down to the ground and removing the material is high on the list,” Max said.

The total cost of the damage caused by the wildfire won’t be known until after contractors submit their bids, but it is likely to be in the millions of dollars, Max said.

In addition to designating its own funds, FoLO is encouraging people to make donations to the UCO Director’s Discretionary Fund by offering a free FoLO membership for donations of $50 or more. Members receive advance notice of Lick Observatory events, discounts at the gift store, and other benefits.

“There is less awareness of the need now that the fire is out of the news, and many people only heard that the observatory was saved—they didn’t hear about the damage to some of the buildings and infrastructure,” Fraknoi said.

The observatory remains closed to visitors, but astronomers have been able to resume telescope operations, thanks to the extraordinary efforts of firefighters, Max said.

“The Calfire people worked hard to keep the fire away from the telescopes, and it really paid off,” she said. “They were wonderful, and the core of the observatory wasn’t damaged, but there are a lot of repairs to do on the surrounding infrastructure.”