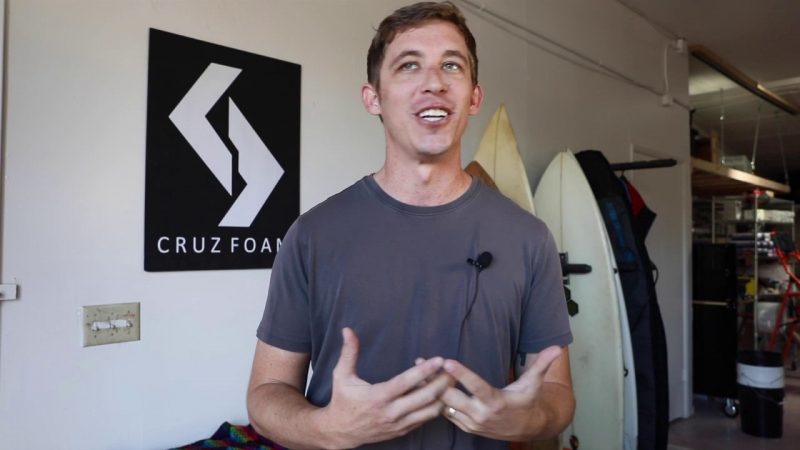 How did you come to UCSC?

I was up to the University of Washington, Seattle, where I met my co-founder, Marco Rolandi, who was a professor there at the time. I was doing my master’s underneath him, and we bonded over surfing. He was on his way down to UC Santa Cruz to be a professor here, and we collaborated and realized that we wanted to work together and focus on this material that he was working with at the time called chitin and really explore its possibilities, particularly around bio-plastics. We had the original idea from surfboards to look at foams, and when I came down here with him, it was to really start tackling that and see if we could turn that material into something useful.

Tell us about your business, Cruz Foam. What do you do here?

At Cruz Foam, our main focus is really to help solve the large issue of plastic pollution, with a hyper-focus on the ocean. There’s so much waste going in there every year- it’s something like 10 million tons of plastic pollution. One of the big areas we saw people weren’t really focusing on was foams, specifically plastic petroleum-based foams. Chitin is the second most abundant polysaccharide on the planet after cellulose, it’s everywhere. One of the main sources we get it from is from shell waste: shrimp, crab, lobster. What we’re doing here at Cruz Foam is taking this special polymer in there called chitin and we’re transforming it into a structural foam. Ideally it has the same properties as a wide of variety of plastic foams.

We started with a focus on the market of surfboards, and that is something we’re honestly still very interested in, but to have the impact we really wanted to have and really benefit the environment and society, we really needed to focus on the largest need, and that was in plastic packaging, foam packaging. This stuff takes 500 years to degrade and doesn’t go anywhere. It’s a bad material and it’s been around for way too long, and Cruz Foam is finally a material that has all the properties to match it mechanically in a cost-competitive way.

How did you transition this idea you had in graduate school to a full-fledged company?

We came out of UC Santa Cruz into Santa Cruz Accelerates… and we were also in Startup Sandbox. Those were both, I believe, originally tied in some way to the school. It was a really great transition for us to have that support because Santa Cruz Accelerates really tapped us in and helped us find some of our first core advisors for our company, who we’re still working with today. Then Startup Sandbox was essential because without it we wouldn’t have had a place to develop the technology. There were a limited number of spaces in this area that weren’t 5,000, 10,000 square feet, and as a startup coming out of school, you are limited on resources, one of those being capital. Having a very accessible, very affordable option to take our technology out of the school and develop it so that Cruz Foam the company could own the core technology and continue developing it was essential for the launch of our business. I don’t think we would have succeeded without Startup Sandbox.

The excitement growing on this side of the Hill has been really encouraging to see, and it’s been fantastic for us to be over here and see this evolving entrepreneurial environment in Santa Cruz even over the last two years. It’s been really fun to be a part of it and I think it’s only going to continue to grow and where we see more companies show up. For Cruz Foam, we’re excited to have the ability to be here, do what we do, and have the support of the community.

What was the biggest challenge you faced when becoming an entrepreneur?

The biggest challenge has been the rapid development in my career and my growth as a person… It’s one of the hardest things I’ve ever done in my life by far, starting this business. I came from an engineering background and so obviously a big, big hurdle was transitioning more towards the business side of things. I think having a really good support system around is one of the biggest reasons we’ve been so successful. Our network here in Santa Cruz has been fantastic, and having that has really helped me develop and grow into this position.

Do you have any advice for new entrepreneurs?

I would say it’s going to be tough, but what’s the most important thing is you’re going to be doing something that you’re passionate about. I went to school for chemical engineering. I could’ve gone to petroleum engineering, I could have done something that was a little bit more lucrative, but being able to make decisions that are really core to what you’re passionate about and what you really want to do with your life is the reason that every entrepreneur is going to tell you they started the business. If it isn’t, then that business I would almost guarantee is going to fail. If you’re not ready to really dig in and put your blood, sweat, and tears behind it, it’s going to be tough. But the most exciting part is that once you do start having real traction and excitement around what you’re doing, there’s nothing better. There really isn’t anything better than, not necessarily having your own business, but really being behind something that is so core to yourself and making the impact you want to have on the world. I was a surfer, I really wanted to see change around the ocean, and now seeing where this company is- it’s really early days, but seeing the potential is so rewarding.