Women in Tech Fire Up in Santa Cruz 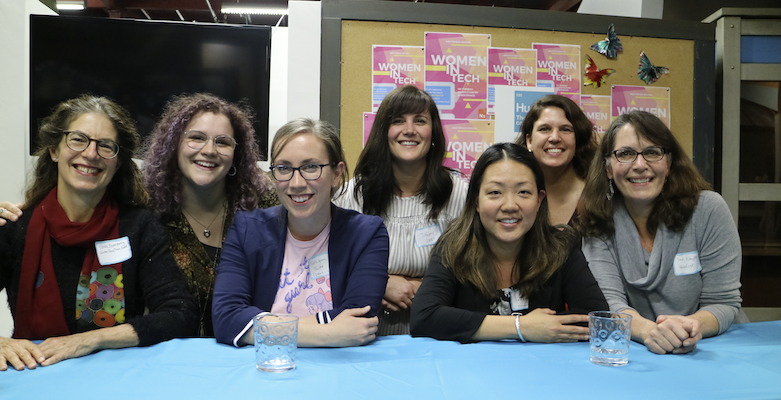 How can we create a strong sisterhood of women in Santa Cruz’s tech ecosystem?

What does it mean to be a women in technology? Last week, techies gathered at NextSpace in downtown Santa Cruz to discuss that very question.

“We want to have a gathering with women who are behind the keyboard, behind the screen,” said Maya Delano,  Senior Community Manager at NextSpace.

The soft patter of rain on the roof of the building set the background for the intimate chat that unfolded. The crowd was comprised of almost entirely women, including three winners of the UCSC hackathon, CruzHacks, who created an Amazon Alexa skill to help women enter data into menstrual tracking apps. “We wanted to hear other women’s stories and see parallels between our experience and theirs. It’s nice to know I’m not alone,” says Keerthana Routhu, one of the hackathon winners.

The goal of the night: to come up with some concrete ways for women to thrive naturally in tech, a code of conduct, so to speak. How can we create a strong sisterhood of women in Santa Cruz’s tech ecosystem?

“We want to create a space where we can see each other and create community,” said Delano.

The panel was moderated by Tiffany Jones, Producer/Digital Product Manager at Design by Cosmic. Jones set the tone before asking each of the four panelists to introduce herself.

Sara Isenberg, founder of Santa Cruz Tech Beat, was the first to speak. She emphasized the importance of establishing a strong network of people you feel comfortable sharing with so you can validate your reality. “Find your tribe of supportive people,” Isenberg said.

Kathleen Tuite, software engineer, followed suit. From turning a terribly male-centric ‘tech-savvy’ barbie book into a feminist hacker barbie enterprise to founding PyLadies, a local meetup group, Tuite has demonstrated she has deep insight into creating strong communities for women in technology. “Community is really really important to me,” she said.

Leila Takayama, ​expert in human-robot interaction and Acting Associate Professor at UC Santa Cruz​ advocated for finding common ground. One example: making sure group activities are ones that everyone is comfortable with and interested in participating in. “Instead of end-of-the-day drinks,” she said, “try end-of-the-day cupcakes.”

Sue Dayton, ​UX/product design consultant,​ stressed the importance of advocating for yourself, as well as for others. “Toot your own horn and don’t make yourself smaller in the words that you use,” said Dayton.

Leila Takayama added, “It’s so much easier to stand up for someone else than it is for yourself. We need to stick up for fellow women when they could use support.”

Margaret Rosas made a guest appearance and spoke to the history of tech in Santa Cruz. “You have to learn how to speak up and be heard,” said Rosas. “Diversity breeds strong ecosystems — we know this from science.”

Just having any tech ecosystem at all in Santa Cruz has been the focus in our community over the last decade. Now, that community is robust enough that we can start to focus on women in technology, Rosas explained.

The moment is upon us, Santa Cruz is now home to a bustling tech ecosystem and one which ought to address the importance of welcoming everyone — but in this case women — into its midst.