Women: Why aren’t there more of us in the tech industry? 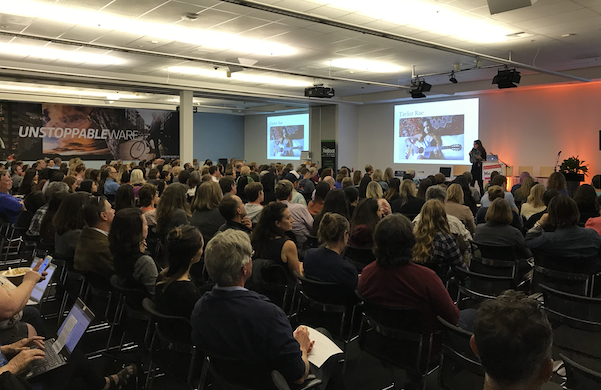 Women in tech are tired of being a minority.

Allow me to introduce myself. I am a high school senior currently in the midst of the nightmare that is the college admissions process. I have recently found a passion for Computer Science and as such was drawn to the recent Santa Cruz New Tech Meetup. I’ve heard about the lack of diversity in Science, Technology, Engineering and Math (STEM) through third-part recountings but I had yet to hear first hand accounts. November’s meetup theme, Women in Tech, provided a platform for community members to hear first-hand from women in the industry. The event was held at Plantronics’ swanky campus headquarters, complete with a fish tank and a waterfall. Attendance was marked by a female majority — probably a good thing seeing as it was an event celebrating women in technology. In fact, out of the first 200 attendees to sign up, only 11 were male.

After schmoozing and food we got into the nitty gritty. Women: why aren’t there more of us in the tech industry?

Pratima Rao Gluckman, Engineering leader at Cloud Platform Business Unit at VMware, the keynote speaker and author of Nevertheless, She Persisted: True Stories of Women Leaders in Tech, offered her personal insight into some of the issues women face in the workplace.

“Women have a glass ceiling. Women of color have a concrete ceiling and have no idea what’s going on up there — we can’t see a thing,” Pratima said. “But it’s not just one glass ceiling, you can shatter one and another one will appear.”

Why is that? Pratima explained that the tech environment is one that is just not designed for women, a fact she exemplifies with the shocking statistic that 57% of women leave their tech careers. Her solution to the issue: white men. Yes, white males are the solution to the issue of diversity. Invite them into the discussion, don’t alienate them. This point was echoed by LeBaron Meyers who said, “Get messy, say the wrong thing, apologize. Let’s keep moving forward.”

The evening wasn’t purely women talking diversity issues — we heard about some female founded and managed businesses, as well. Sara Chandler of Elemental Excelerator, a non-profit helping startups change the world, is helping foster engagement and partnerships between start-ups in medium to low income regions of California. Catelyn Orsini, a Product Architect at Plantronics, not only builds products but also finds time to teach Diversity in Coding workshops on the side. Keri Waters, Co-founder and CEO of Buoy Labs, is pioneering the field of home water management technology. Chrissy Meyers of Root Ventures is one of the few female venture capitalists and an experienced engineer. These women each exemplify what a diverse perspective in the information technology industry can lead to.

Diane Flynn of ReBoot Accel, a career accelerator for women, described her aspiration to “make ‘the only’ experience rare.” Women in tech are tired of being a minority. This resonated with me personally. I am a woman in high school who is planning on pursuing a degree in Computer Science next year. I am the only female in my Advanced Computer Science class and I am the second female at my school to have ever taken this class. Given that my high school has a ~50/50 gender ratio, I would’ve hoped that the course enrollment would be the same.

I was able to catch up with Margaret Rosas, Director of the Department of Customer Love at Looker and a long-time member of our local tech community, and ask her some questions after the event.

TW: What does it mean for you to be speaker at this event?

MR: I’m not super keen about being the focus of an event based on my gender alone and that is how it can feel when asked to present at a Women in Tech event. However, I also recognize how underrepresented women are in technology and as a woman I feel the responsibility of bringing visibility to our stories. Personally, I nearly missed out on having a career in technology because I was looking to be in a place where I felt I had a strong sense of belonging. Yet when I was choosing a college major, I explicitly rejected the idea of a Computer Science degree because I didn’t see any women — students or faculty — in the classrooms. I think it’s important to make sure women are coming forward and sharing their journeys in spite of the low numbers of women in the field.

TW: What are the most important tips you can give me as a female planning to go into Computer Science?

MR: Look for heroes and role models in every gender, every race, from every kind of background — mentors come in all shapes and ages. Understand how you are similar or different to the men you’re surrounded by and work through those differences. In my experience, gender is more of a spectrum than black and white. You’ll find men who have deep empathy and women who are vocal and outspoken — try not to profile people because of their age, gender, race or background. Be amazed at how diverse groups of people will enrich your life and do everything in your power to encourage diversity in all aspects. When you feel like you aren’t being heard or recognized, say something, speak up, find advocates and build a network of people around you that will lift you up.

TW: Why do women need their own month in technology, why aren’t we a part of technology year-round?

MR: Given the much disproportionate population of women in technology, providing a month of focus on the women provides at least one month where journalists, events and industry are providing a spotlight to the women who are making their careers in technology. This kind of focus will help women see themselves as technologists and be able to imagine stepping into a career in tech.

TW: Since you’ve been involved in the Santa Cruz Tech community for so long, how has the community changed for women specifically?

MR: When I first started my community building efforts in town, the number of female founders and female leaders was incredibly small. Today those numbers have more than doubled (based on folks I know), but overall we have more work to do to provide women with an equal seat at the table when it comes to raising money and leading technology companies.

TW: Do you have personal hero/role model in the local tech community?

MR: I am inspired by every person I’ve known that goes out there and starts a company and continues to press on. It’s not an easy feat in this town and I have great admiration for all of our local entrepreneurs.

Back to the meetup…

Fortunately, there were plenty of young women from UCSC present at the meetup. It was refreshing to see other young females interested in technology.

Emily Mount of PoPPy, UCSC’s iGen team, made a progesterone producing yeast that can be grown in-home and used as an affordable reliable contraceptive which women themselves are in control of. When asked what attracts her to tech, Emily replied, “it’s fast and exciting, it’s new and you can help people, which is really cool.”

Victoria Tran, another student in STEM, attributes her interest in stem to her upbringing in the Bay Area. “I would trip and fall and find a startup that was doing some really cool thing everyday.”

Others, including myself, accredit their family with encouraging them to pursue STEM. My dad, a Computer Scientist, has been stressing the importance of technology my entire life — he no doubt is the reason I choose to enroll in a Computer Science class in high school.

Diversity in the tech industry is a 21st century rendition of the chicken and egg conundrum.

In order to increase industry diversity, we need more of it. “I just don’t understand why, in a war for talent,” Guy Kawasaki, author, speaker, entrepreneur, and evangelist said, “you would write off half the population… It’s just plain stupid.”

We shouldn’t need to have a Women in Technology month. We should be a part of technology year-round. But until the industry realizes this, let’s keep pushing for change!