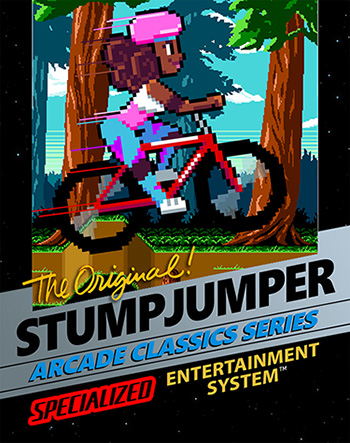 When the bicycle company Specialized wanted a videogame to accompany the introduction of their latest Stumpjumper mountain bikes, they approached the game design program at UC Santa Cruz. Nathan Altice, professor of computational media in the Baskin School of Engineering, volunteered to organize a team of students to take on the project.

“It was a paying project, so it was a great opportunity for the students to work with a client while they’re in school. Working with a client is completely different from working on your own project,” Altice said.

Specialized wanted a retro style game like the old 1980s Nintendo games, because the Stumpjumper line debuted in the early 1980s as the first mass-produced mountain bikes. This idea appealed to Altice, who studies the history of computing and games (his book I Am Error is a comprehensive technical and historical account of the Nintendo Entertainment System).

Altice selected a group of talented students who he thought would be able to handle the project on top of their regular school work, and the team spent the next six months developing the game and getting it to work as a web-based game playable on a wide range of devices.

Specialized released “Stumpjumper: The Video Game” on October 11. It’s a two-dimensional, lane-based racing game inspired by an old Nintendo motocross game from the 1980s called Excitebike. A storyline involves winning the big race to save the hometown trails from “Big Corporation” developers. There are stumps to avoid, ramps to jump, and coins to collect, but no particular skill is required to play the game.

“We wanted it to be accessible, something anybody could have fun with, so the bike goes by itself, and as a player you’re mostly changing lanes and doing tricks during jumps,” Altice explained.

Lead developer Johannes Spaulding said he was initially skeptical about taking on the project, but in the end it seemed like too good an opportunity to pass up. “The more I learned about what Specialized wanted to do, the more interesting it sounded,” he said. “I liked the idea that the barrier to entry would be really low, so anyone could play it, and just knowing that lots of people would be playing our game.”

For Spaulding, the project eventually became his senior capstone project, which he presented at the annual Sammy Showcase hosted by the UCSC Center for Games and Playable Media. “It was very encouraging to see droves of people going on their phones and playing our game,” he said.

In addition to Spaulding, who worked on all aspects of the game, the students on the team included Andrew Gwinner (programming and design), Jared Pettitt (programming, design, and concept art), Courtney Chavez (animation and concept art), and Long Nguyen (concept art and environment art). Altice did the music, sound effects, and level design for the game.

As producer, Altice also served as the liaison between Specialized and the student team. “They ended up being great clients,” he said. “They just had to trust the process, and when we showed it to them they were thrilled. The students put a lot of care into the design and made a real professional-quality game. The feedback has been good from social media, too.”

Spaulding said he hopes the game’s success will lead to more opportunities for students to work on industry-sponsored game projects like this. “If you give students a chance to follow their passion, they can produce a game that people will really like,” he said.