Beth Shapiro Explains the Science of ‘De-Extinction’ in New Book

A leading expert on ancient DNA, Shapiro aims to separate science from science fiction in her new book ‘How to Clone a Mammoth.’

Tired of answering questions about cloning mammoths, Beth Shapiro, a professor of ecology and evolutionary biology at UC Santa Cruz, wrote a book called How to Clone a Mammoth. (Spoiler Alert: You can’t actually clone a mammoth.) 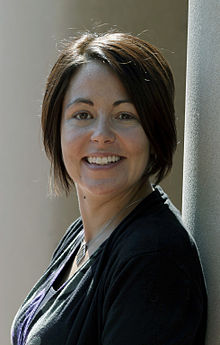 Tired of answering questions about cloning mammoths, Beth Shapiro, a professor of ecology and evolutionary biology at UC Santa Cruz, wrote a book called “How to Clone a Mammoth.” (Photo credit: http://en.wikipedia.org/wiki/Beth_Shapiro)

Shapiro is a leading authority on ancient DNA–how to recover it from fossils, museum specimens, and prehistoric remains buried in frozen tundra, and how to analyze it for clues to the evolutionary history of species and populations, both living and extinct. She has studied DNA from ancient populations of bears, horses, humans, and, yes, mammoths. But she is not a big proponent of “de-extinction”–the idea that scientists could use ancient DNA to recreate extinct species.

In How to Clone a Mammoth: The Science of De-Extinction (Princeton University Press, May 2015), Shapiro addresses the scientific and ethical challenges that would confront any effort to bring back extinct creatures.

“I question if it’s something we should do at all, for many ethical and environmental reasons,” Shapiro said. “I’m trying to separate the science from the science fiction, because too much of what people hear is science fiction. In a field that’s so full of hyperbole, people should be armed with the facts so they can make informed decisions.”

As for “cloning” a mammoth, that would mean creating an animal with a complete mammoth genome, mammoth chromosomes, and mammoth cells. It’s not possible because scientists have only been able to recover fragments of DNA from frozen mammoth remains. What is plausible, and what some scientists have proposed doing, is to insert mammoth genes into the elephant genome to create an elephant with traits that would enable it to live in the Arctic, such as thick hair and cold-resistant blood. But what’s the point?

“If the point is to put it in a zoo, then we should probably stop right now,” Shapiro said. “If the point is to restore diversity to preserve an ecosystem that doesn’t function well without a certain animal, then maybe it’s worth considering.”

Mammoths, for example, may have played an important role in Arctic ecosystems, helping to maintain frozen tundra through their grazing and trampling. But there are still serious ethical issues to consider before embarking on the creation of such a dramatically modified animal (which may not be a clone, but would probably always be called that in the popular media).

In How to Clone a Mammoth, Shapiro provides detailed descriptions of current state-of-the-art bioengineering technologies, explaining just what can and cannot be done. She also provides a thorough discussion of the ethical and environmental issues raised by de-extinction proposals. Readers of the book will be well equipped to develop their own informed opinions on this controversial topic.

Shapiro has several talks scheduled in the coming months, including events at the Bone Room in Berkeley April 23; the Long Now Foundation in San Francisco May 11; the Crepe Place in Santa Cruz June 10; and the Commonwealth Club of San Francisco on June 25.