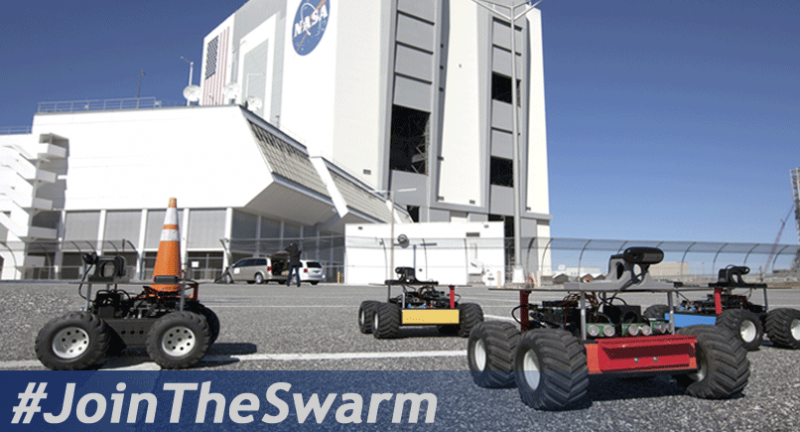 After winning the Virtual Competition of the First Annual NASA Swarmathon last year, the Cabrillo College

Robotics Club has earned its place to compete in the national, Physical Competition of the Second Annual NASA Swarmathon, which will be held at the Kennedy Space Center in Cape Canaveral, Florida from April 18-20.

The NASA Swarmathon competition is a challenge to develop cooperative robotics with the goal of advancing future space exploration. Cabrillo is one of only 20 universities and community colleges from across the nation that will compete in the Physical Competition. Of the 20 competing teams, only four teams (including Cabrillo College) are from a community college – the rest are four-year universities.

Successful space exploration requires technology to aid in the location and retrieval of resources that would potentially support life on another planet (such as ice, water, rocks, minerals and construction materials).

Small, rover robots, or ‘Swarmies’ can be programmed to explore extra planetary surfaces for these resources. The goal of the NASA Swarmathon competition is to develop and optimize the Swarmies so that they work in cooperation, improving their resource retrieval rates 2-4 fold, much more quickly and efficiently than robots working alone. NASA will likely use some of the ideas that Cabrillo and other schools develop for the competition, for future space exploration missions.

As stated on the NASA Swarmathon website: “Students will be challenged to develop search algorithms for robotic swarms. Swarmathon participation will:  (1) improve student’s skills in robotics and computer science and (2) further advance technology for future NASA space exploration missions.”

“I am so proud of our students – they worked incredibly hard to win the virtual competition last year, in a tough field of 23 colleges and four-year universities,” said Mike Matera, Cabrillo Computer and Information Systems Instructor and Robotics Club Advisor. “That earned us a spot in the physical competition this year, and we’re looking forward to another strong showing. Our club members are working hard on coding and are constantly testing with each new code release, in addition to doing the organizing and fundraising needed for the upcoming trip.”

Cabrillo College is a Federally Designated Hispanic Serving Institution, and Minority Serving Universities and Community Colleges were encouraged to apply and compete.

As part of Cabrillo’s participation in the Swarmathon, Cabrillo’s Robotics Club is conducting outreach with Harbor High School for five weeks, to get Harbor High students interested and engaged in robotics and related STEM (Science, Technology, Engineering and Math) fields.

For more information, please visit the Robotics Club website or the Cabrillo College Robotics Club Facebook page. They also have a GoFundMe page set up to raise funds for their upcoming trip. Additional information about the NASA Swarmathon is also available at www.nasaswarmathon.com