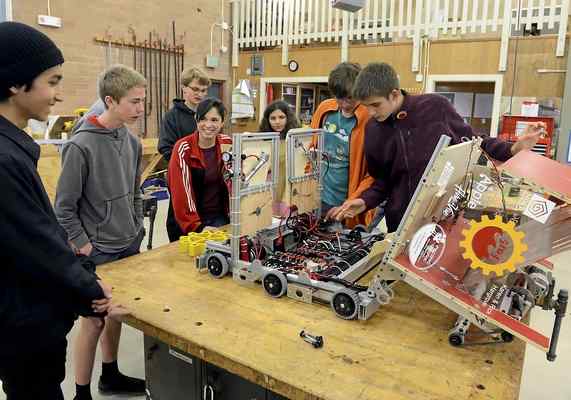 (Photo above: Members of the BreakerBots, Pacific Grove High School’s robotics team look at the internal components of their robot in the wood shop at the school in Pacific Grove. Credit: David Royal, Monterey Herald)

It’s been a few days since the BreakerBots from Pacific Grove High School competed in the regional FIRST (For Inspiration and Recognition of Science and Technology) Robotics competition in Madera, but Gavin James still can’t hide his excitement as he describes the team’s performance in rapid-fire speech.

“This year the theme is Steam Work. Last year it was a medieval theme,” James said.

The robots competed in helping, along with two other ally teams, prepare a steam-powered air ship by picking up gears, mounting them on a peg to lift them to the bridge of the ship for installation.

“It’s a lot,” James said. “This is a big source of points so we designed the robot around doing this part of the game.”

Other parts of the game are loading fuel into the ship and loading the robots in preparation for liftoff. The three-team alliance that compiles the most points in preparation in an allotted time advanced. A video breaking down the game is available at http://bit.ly/2nucN0z.

Because of the scoring system, the BreakerBots advanced to the final round as “alliance captain,” which meant they could pick other teams to work with. They chose Huntington Beach (Surf City Vikings) and Monterey (RoboDores).

The BreakerBots advanced to the finals where they lost to a team led by Citrus Circuits from Davis, which ranked second in the world last year.

“We were lucky to even be on the same level as these guys, that’s an amazing accomplishment,” James said. “We’re a fourth-year team.”