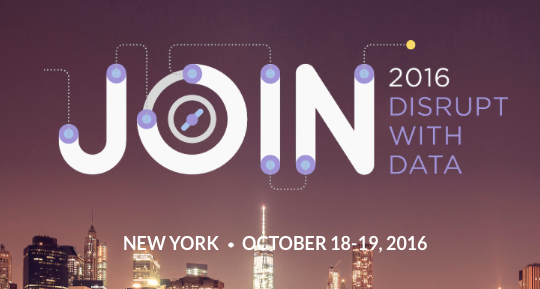 [Editor’s note: This article also showcases some of Looker’s milestones in 2016 — a banner year for the company.]

Looker is gathering the most innovative minds in data and analytics at its first multi-day event – Join 2016 – in New York City on October 18-19. This event is the culmination of a banner year for Looker in which the company drove significant revenue and customer growth, opened offices in New York and London, and received widespread recognition, including being named a Breakout Vendor by Forrester.

Join 2016 brings together smart, innovative data professionals disrupting industries by using data to power their companies’ growth. The conference is focused on the real-world problems–technical and cultural–that data-driven companies tackle every day. Featuring deep-dive tech talks, hands-on workshops, and real-world stories about how data is shaping the future, Join 2016 offers something for everyone: data experts, business analysts, and business leaders.

“There’s a huge gap today between companies that leverage data effectively and those that have the data, but can’t figure out how to operationalize it,” said Frank Bien, CEO of Looker. “And while it’s clear this is an important focus area for businesses, there isn’t a good forum for data analysts to learn from and share with their peers. Join 2016 is all about bringing together the people who do the hard, important, unglamorous work that makes data valuable.”

It’s been a busy year for Looker, one of the fastest growing SaaS companies. In addition to securing an additional $48 million in funding, Looker revenue grew nearly 3X year-over-year, while its customer base more than doubled to over 750 during the same period.

Along with releasing monthly updates to the Looker Data Platform, the company also released a number of significant product features, including:

What They Are Saying