IDE: Taking a simple toy to the next level 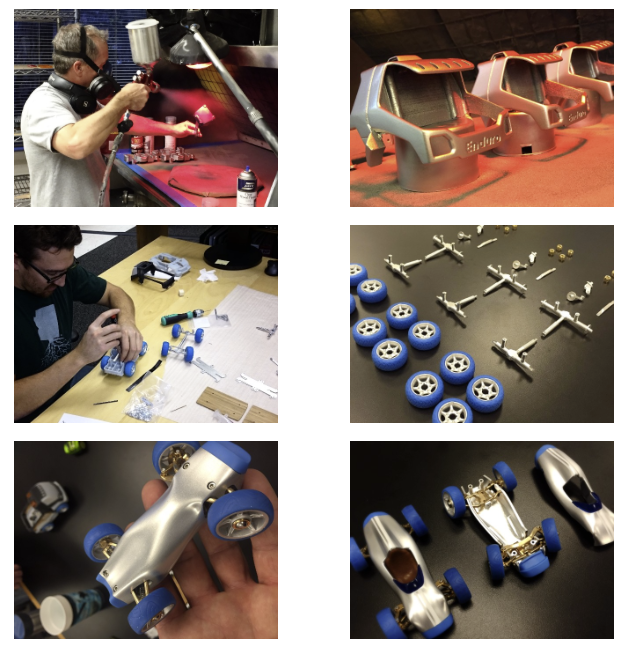 By Thomas Illick
Director of Marketing and Sales, IDE

(Photos above: IDE’s engineers designed the suspension and steering systems, provided the design for manufacturing, completed hours of CAD development, and managed various vendors in order to build prototypes for the the 2016 New York Toy Fair. Contributed.)

“The team at Thoughfull toys came to IDE with a concept, some early proof-of-concept prototypes, and a few design sketches and renderings. They had a clear goal in mind, but needed help with the Design for Manufacturing, Prototype Development, and Final Product Development required.  IDE took this input, and completed all the mechanical design engineering to make the cars functional, rugged, and manufacturable, all while staying true to the design intent.” 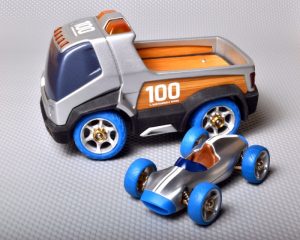 With their metal bodies, rubber bumpers, green materials, and active suspension and steering, The Enduro Racer and Enduro Truck take the simple toy car to the next level.

Thoughtfull Toys is the maker of the highly successful Modarri cars, modular toy cars with fully functional suspensions and steering, and modular components. You drive them by simply putting your finger in the seat, and moving them around freely. The steering, suspension, and sticky tires allow you to carve tight corners and control the cars completely.

This new Enduro product line work the same way, except they do not disassemble with tools or have small loose parts. This is because they aim to bring technical engineering toys to a younger age group, ages 3-and-up. Just like the real thing, the Racer has fully independent suspension front and rear, while the Truck has solid axles front and rear.

For added playability, the Enduro Racer or any of the Modarri line of cars will fit inside the bed of the Enduro Truck.

We are proud to say that these toys are made from sustainable and eco-friendly materials. The few bits of plastic on these vehicles, on the windshields and lenses, are made from recycled water bottles.

The bodies, wheels, and suspensions on both vehicles are made from recycled brass and aluminum. Dyed natural rubber is used for the tires and bumpers.

The Enduro Truck features real sustainable bamboo panels in its bed, and the Enduro Racer features a seat made from real leather, sourced from unused furniture scraps.

The toys must resist the normal abuse expected from the Ages 3-and- up crowd, and then some.

Both vehicles are designed to withstand being stepped-on by at least 100 pounds of force, by strategically bottoming-out. The Racer’s body bottoms out on the floor, protecting the suspension components from bending or being damaged. The Truck has a hard stop between the chassis and axles,  protecting the suspension from damage. A thick label on the Racer’s belly protects play surfaces, so the cars don’t scratch things during normal aggressive play.

Thick natural rubber bumpers offer impact resistance for the toys and the home when rolled into walls or dropped. Rugged tamper-proof fasteners prevent the cars from ever being taken apart, so small loose parts can not come free and become a choking hazard.

The team at Thoughfull toys came to IDE with a concept, some early proof-of-concept prototypes, and a few design sketches and renderings. They had a clear goal in mind, but needed help with the Design for Manufacturing, Prototype Development, and Final Product Development required.  IDE took this input, and completed all the mechanical design engineering to make the cars functional, rugged, and manufacturable, all while staying true to the design intent.

IDE developed all-new suspension designs. The Enduro vehicles had to match the playability, manuverability, and general feel of their Modarri cars, which was no small feat. The engineering team at IDE knocked it out of the park, by researching suspension designs, and then iterating dozens of concepts, slightly improving geometry until the ideal solution was discovered. Dozens of concepts were 3D printed at IDE, and eventually machined out of brass and aluminum to replicate the production manufacturing methods.

Under a tight deadline, three of each vehicle were fabricated and delivered to Thoughtfull Toys in time for the 2016 New York Toy Fair.  The cars were the talk of the show, earning Thoughtfull Toys numerous accolades. Almost everyone who picks up these toys or plays with them asks “When can I buy one?”

Production toys are expected to be available before the 2017 Holiday season.