Posted on May 27, 2016 by Sara Isenberg in Companies, Events, Featured, Monterey Tech Ecosystem 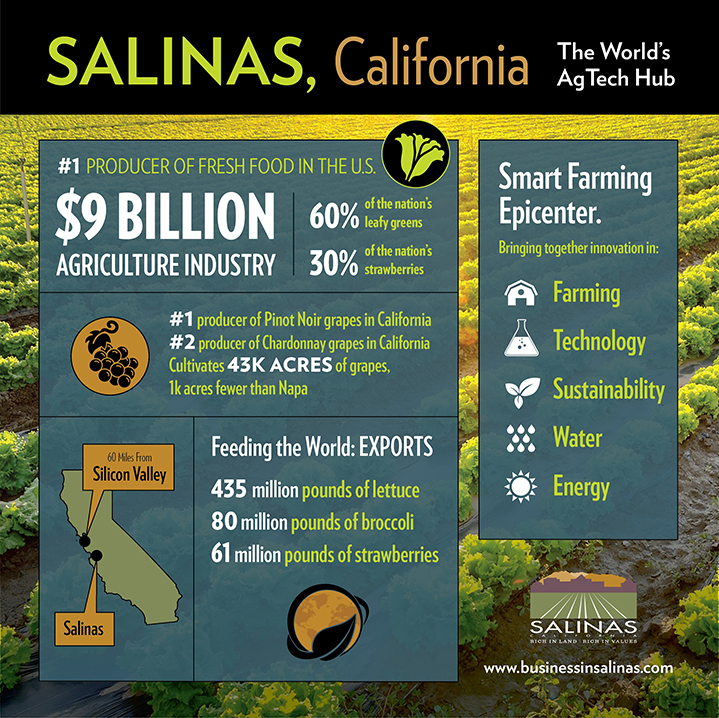 California’s Salinas Valley is poised to become the world’s next agriculture technology hub. Located just 60 miles south of Silicon Valley, the region is home to a more than $8 billion agriculture industry.

With the global population expected to surpass 9 billion people, global food production needs to increase 70 percent by 2050. As a result, Salinas and Silicon Valley leaders are incorporating high-tech solutions into farming – from big data and sensor technology to the Internet of Things and drones.

On July 13 and 14, 2016, all eyes will be on Salinas as the city hosts the Forbes AgTech Summit for the second consecutive year. The event will bring together over 500 of the smartest minds in Silicon Valley and global agriculture to tackle some of the world’s most critical challenges.

The City also has received the 2015 Helen Putnam Award for Excellence from the League of California Cities for its efforts in developing an AgTech Ecosystem.

In 2012, the City of Salinas, in partnership with local leaders in industry and education, launched the Steinbeck Innovation Foundation, a public-private partnership with the goal of connecting the Salinas Valley to Silicon Valley in an effort to create high-tech jobs and help solve some of the most pressing global issues in water, sustainability, food safety, precision agriculture and more. The City has also partnered with The Western Growers Association and the Thrive Accelerator to promote entrepreneurism in the AgTech space. The City is also partnering with the National Resource Network, a technical assistance provider affiliated with the White House’s “Strong Cities, Strong Communities” program, to enhance the development of Career Pathways in AgTech, to ensure that businesses have access to the skilled workers they need.

Read on to learn more about Salinas’ ecosystem to drive collaboration and innovation in agriculture in these areas:

The City of Salinas is helping entrepreneurs in the agriculture technology industry turn their ideas into businesses with mentorship programs, work spaces and education programs.

The Western Growers Association (WGA), in partnership with Silicon Valley Global Partners (SVG Partners), opened an innovation center in the summer of 2015, at Taylor Farms’ new downtown Salinas headquarters. It has been used for all commodities in the regions where WGA members operate and gives entrepreneurs and innovators access to Western Growers mentors and office space. WGA’s members in Arizona, California and Colorado produce approximately half the fresh produce in the country.

The eight-week Steinbeck Innovation FastTrac® NewVenture™ Program has trained more than 50 entrepreneurs in Salinas on how to take their idea, grow it into a business and compete for funding.

One of the graduates, Patrick Zelaya, who left John Deere after more than a decade in tractor sales, launched Heavy Connect, an AgTech startup that works with big data to provide farmers and farm managers with a variety of information about their crops. The company employs a team of Salinas-based software engineers and designers who understand the complexity of field operations and the agriculture industry.

Read more in the Salinas Californian.

Run in partnership with Salinas’ Hartnell College, this free, volunteer-run program teaches children ages 8 to 17 how to make web pages and apps, and how to produce content, games and more. Hundreds of Salinas-area youth have participated in the program so far – developing the building blocks to take advantage of jobs that require technological skills, such as those in the AgTech industry.

CSUMB and Hartnell also boast a unique program called CSin3, which allows students to earn a computer science degree in three years, two of which are spent at the junior college level.

Participating startups have the potential opportunity to receive up to $5 million in funding. The program also helps entrepreneurs connect with top universities, such as UC Davis, which boasts the No. 1 agriculture and environmental sciences program in the country.

Forbes Reinventing America: The Ag Tech Summit, July 8-9, 2015, highlighted startups from across the world which had participated in the Thrive Accelerator. Click here for a list of the companies.

The Steinbeck Innovation Fund is a growing Venture Capital Fund dedicated solely to funding AgTech businesses, with a goal of $100 million in venture capital funding available.

Donations have been received from several major investors, including $4 million from the Western Growers Association.

Last July, Salinas hosted “Forbes Reinventing America: The AgTech Summit,” which brought together entrepreneurs, high-level executives, venture capitalists, researchers and other leaders in Silicon Valley and global agriculture in the Salinas Valley to tackle some of the world’s most critical challenges.

From biotech and precision farming to big data’s role in feeding a planet of eight billion people, “Forbes Reinventing America: The AgTech Summit” explored topics at the core of this vital trend.