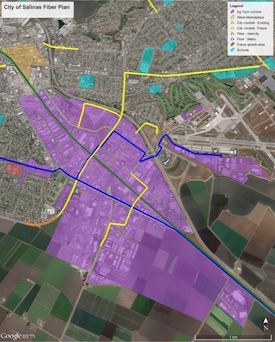 The City of Salinas has officially released a request for proposal, looking for telecommunications companies that are interested in using its municipal conduit system and other local assets to build out a high speed broadband system in key commercial and industrial areas…

The City of Salinas owns a total of 16,000 feet of telecommunications conduit that is available for use (see above referenced study) by respondents. Approximately 5,400 feet is in the core downtown business district, 1,600 feet in or near the planned Agricultural Technology Corridor and another 9,000 feet in an unincorporated area southwest of the city. Over the next ten years, the City plans to build an additional 108,000 feet of conduit, with construction in key areas – downtown, the Agricultural Technology Corridor, Alisal Marketplace and new developments in north Salinas – planned to be completed in two to five years. In addition, the City has an ongoing policy of installing telecommunications conduit in excavations in the public right of way and in other public works projects.

The information requested in the RFP is relatively top level – the objective is to get sufficient information about technical and business plans without putting too much of a burden on respondents.

The project is the result of a broadband study and plan I developed for Salinas last year. The Salinas City Council adopted it on 15 December 2015. It leverages several long haul fiber optic lines that run through the city already, and one that’s under construction by Sunesys LLC. Funded by a California Advanced Services Fund grant and available on a open access basis for a fixed price of $8.50 per mile per month, the Sunesys line will connect Salinas to Silicon Valley via Santa Cruz, as well as linking to major fiber access point locally and in Soledad, and providing in-town connections.