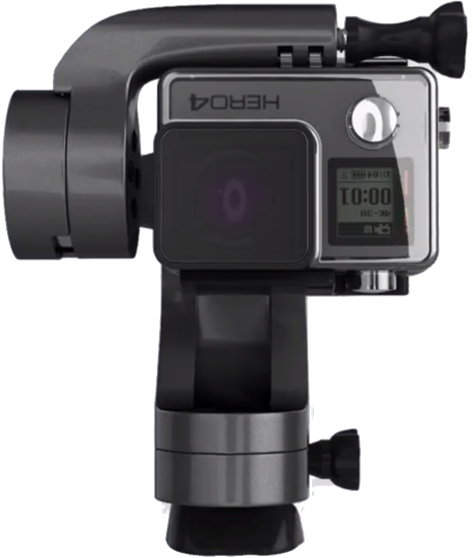 SLICK is a Waterproof Go-Pro Stabilizer, and the company has raised over $400K on Indiegogo.

“I figured out in half a day that Santa Cruz is the perfect place to create the team, setup an office, and be close to our customers.”

One of the first things I do when I hear about a cool tech startup is to figure out if there’s a local connection. These days, as publisher, local means Santa Cruz, Monterey, and San Benito Counties. When I first heard about the SLICK Go-Pro Stabilizer, I couldn’t make the local connection. Everything seemed to indicate they were based in San Francisco. A few weeks ago, however, I learned from Slick’s founder and CEO, Thomas Agaraté, that the company had indeed moved to Santa Cruz. OK, then, I thought, it’s time for the local community to know more about Slick.

Slick was made for action sports lovers

Agaraté started to innovate in the drone field when he created his first company in France at age 19 when he developed his own drones with stabilization hardware for cameras. As a pioneer, he traveled all around the world piloting his drones for cinema, advertising, and TV, but especially for extreme sports. While riding with a GoPro on a helmet, he found it was impossible to replicate GoPro ads and get the wonderful steady shots. So Agaraté decided to adapt the stabilization technology he had used in his drones to a wearable smart device to capture professional action sport content. Slick was born!

SCTB: What makes Slick better or different than any competition?

TA: Steadycams have existed for decades but they are expensive, and tricky to use so they’re definitively not for the mass market. Slick is the very first smart stabilizer to capture action sport. It’s designed by and for action sport lovers, meaning it’s durable, waterproof, and very good looking.

SCTB: How much were you asking for at the start of your Indiegogo campaign? Did the $400K+ results surprise you?

TA: When we arrived in the Silicon Valley, we were told that we needed a proof of market. So we launched a first version of a prototype on Indiegogo and reached our goal of $50K in 5 hours. We  pre-sold 2,000+ units. That’s a nice proof of market for a product that didn’t already exist. That money helped us set up the company, create a team, finish the industrial design of the product and start production.

A very nice thing about Indiegogo is that the product we first presented in the campaign and the final product are very different. We received hundreds of emails from our backers with suggestions for Slick. So, the final product, created by our early adopters, is much improved. We cannot release a product that doesn’t fit the market.

SCTB: What brought you to San Francisco from France?

TA: In France, I developed the first prototype when I was in engineering school, during nights. My vision was to create a strong brand that all action sport lovers would know, but it wasn’t possible in France. I decided to move to the Silicon Valley for my last 6 months of an internship to reach the big medias and start buzz for the Indiegogo campaign. I can also say that the Silicon Valley was kind of a dream in my mind since I always knew I couldn’t be an employee.

TA: When the Indiegogo campaign ended, I went to a lot of meetups and figured out that nobody was doing IoT hardware and, even less, action sport hardware. I had the opportunity to come to Santa Cruz one day and figured out in half a day that it’s the perfect place to create the team, setup an office, and be close to our customers.

SCTB: Who’s on your team? What kind of talent are you looking to hire?

TA: Once in Santa Cruz, I partnered with my co-founder, Lancelot Gelas, who is a Mechanical Engineer. He was working in LA when I reached him (thanks to the Inboard team). He quit his job and joined me in Santa Cruz. We hired an industrial designer who is now in Shenzhen, China, to work on production. We are now hiring an electrical engineer and some other talent to have a complete team.

SCTB: What are your biggest challenges for the next few months?

The biggest challenge now is to produce the thousands of units we pre-sold. We are full-time dedicated to it. We have current revenue of $30K+/month which is over our burn rate, so we can handle it, but we are thinking of raising additional funds to set up the scalable production line for the hardware, and especially to develop the next features of Slick. Stabilizing the camera is the very first step and the most costly. After that we want to start working asap on the tracking/connected feature to make Slick a smart device.