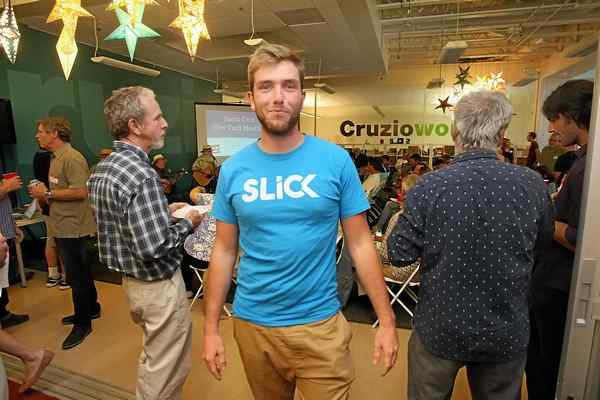 In France, Thomas Agaraté won awards as an engineering student for his inventions and started his own drone company. So why did the 24-year-old engineering wiz come to Santa Cruz to launch his startup?

He likes to paraglide. His co-founder likes to kite-surf.

On Wednesday, he told more than 250 people at the Santa Cruz New Tech MeetUp about his latest invention, an accessory for GoPro camcorders that replaces a jumpy video with a smooth-as-silk views. He calls it Slick.

“It solves one of the last problems in capturing action sports,” he said, describing the user experience offered by competitors as “terrible.”

With a small team, five including himself, working out of a location on the Santa Cruz Eastside, the task is deliver the product by March to those backers.

The hardware will be manufactured in Asia, he said, with assembly planned for the U.S.

Asked if he would trying selling Slick to GoPro, Agaraté said, “We want to sell to the mainstream market first.”

“My wife surfs, I like to bird-watch,” explained founder David Apgar,