Formula Slug: Electric cars are the future, and we’re building it

Formula Slug is a dedicated group of UC Santa Cruz student engineers, mathematicians, computer programmers, and business majors committed to building both an effective team and a high-performance electric car.

Late fall quarter of 2014, twenty UC Santa Cruz students gathered on campus to discuss the formation of a new electric vehicle club. None of us really knew what we wanted to do and we didn’t really know anything about one another other than the fact that we were really passionate about electric vehicles. Our membership numbers rose and fell while we molded the direction we wanted the group to take. After a few meetings, we decided to form what we called the Electric Vehicle Research & Development Collective (EVRD). The aim of this group was to try to fix existing transportation issues on the UC Santa Cruz campus with electric vehicle solutions.

We began by replacing GEM (Global Electric Motorcars) cart battery systems in order to bring greater efficiency to our local Transportation & Parking Services (TAPS) on campus. The university uses these golf cart-like vehicles called GEM carts to carry materials around campus. Most of these vehicles run on very old lead-acid batteries that struggle to hold charge, especially with the steep hills on campus. Some carts would go from full charge to dead in a single trip, making the carts more of a burden than anything else. Even more concerning, the batteries were beginning to leak battery acid, posing an environmental danger as well as danger to their operators. EVRD realized that a simple solution to these problems would be to replace the existing lead-acid batteries with lithium-ion batteries, as they are much more efficient and powerful. This was not an easy task since it was questionable whether the battery housing, which was designed for lead-acid batteries, would support a lithium-ion implementation.

After a few months of research and meetings with TAPS, EVRD was able to successfully complete a test of a new and improved cart utilizing a fresh lithium-ion battery system. This new system meant that we were able to make some astonishing performance and efficiency improvements: The old lead-acid based carts had a top speed of 5 miles per hour when going uphill. Our new lithium-ion based cart had a top speed of 25 miles per hour uphill. The old cart had a 30-40% drop in charge after a half loop around campus; our cart stayed at 95% after several days of use, which included 3 complete loops around campus in addition to 2 test loops. We were ecstatic to learn that our cart was not only featured at the UC Fleet Manager’s Conference, but it also outperformed a brand new GEM cart.

As time went on, EVRD accumulated more and more projects on campus and decided to consolidate these efforts under Engineers for a Sustainable World (ESW). These projects have been both very constructive and rewarding, but we realized we needed to think bigger. 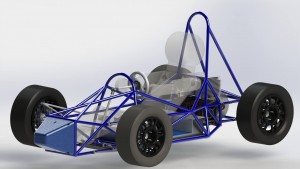 This past year, we began efforts to construct our own electric vehicle and compete in the annual Formula Society of Automotive Engineers (FSAE) electric vehicle competition this summer against other universities from around the world. This competition culminates in a race and design competition that tests all aspects of the vehicle including safety, performance, and endurance. It was decided that this project would be called Formula Slug, a name that pays homage to the university’s friendly yet competitive nature.

Since we began, we’ve grown to over 100 members, making us one of the largest teams of our kind in the nation. The club is completely student run, and all aspects of developing an electric vehicle are handled by our members. Our dedicated student members handle everything from finance, to electronics and manufacturing. We are nearing the end of our design phase and have begun preparations for the actual production of the vehicle. We have recently acquired space on campus, and our funding efforts are already in motion.

Providing value to the community

Although Formula Slug is still in its infancy, we’ve come a long way as an organization. We have plans for our FSAE team as well as the EVRD organization to continue our growth and our mission of providing value to students, the university, and the Santa Cruz community as a whole. Research and development of sustainable methods of transportation is something we can all benefit from, and Formula Slug wants to help get the ball rolling. With the support, expertise, and resources of Santa Cruz we can help make our community a more sustainable place to live in. We’re looking forward to seeing what the future holds and we couldn’t be happier to be working alongside our community.

We are now actively seeking to raise $15,000, and invite the local community to help us reach our goal. (For more information about us, please see our links, below.)

To get in touch, email us at team@formulaslug.com.

Make a donation at formulaslug.com/donate.