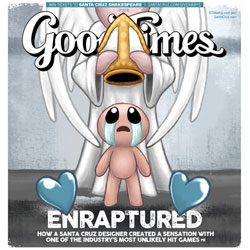 [Editor’s note: Readers might recall our article “Garden of Gaming in Santa Cruz is Tilled and Ready for Growth” published in April 2014. Some of it is a bit dated now but it’s still a good read if you’re interested in the local gaming hub.]

The Binding of Edmund McMillen 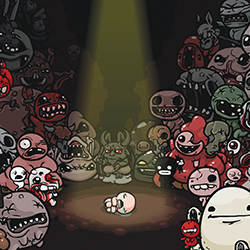 Edmund McMillen still sports the same calm blue eyes, unassuming smile and Melvins T-shirt as the struggling, unknown game developer he once was, trying to get by with his friend Tommy Refenes in their bedroom studio. But the 35-year-old McMillen, who has lived in Santa Cruz all his life, has been anything but complacent since the wild success of his independent title Super Meat Boy in 2010. After designing a number of award-winning games like Gish, Coil and Aether, and forming the indie game company Team Meat with Refenes, McMillen is now experiencing his biggest and most unexpected success yet with The Binding of Isaac and its multi-platform expansion from the end of last year, The Binding of Isaac: Rebirth.

Full of dark satire and disturbing imagery, The Binding of Isaac is the kind of unlikely hit that only McMillen could dream up. For him, it was a chance to return to his game-making roots.

“I wanted to do something to relax, but also prove that I was still independent,” says McMillen. “Before Meat Boy, I had been making games without caring about money, or getting on a platform. Even though Meat Boy stayed true to what I was doing, it was still very safe. It was the least risky of all the projects I could do, because I wanted to try and make a future. I did some really weird stuff back in the day, and I wanted to be able to prove that I was still able to do that. I didn’t have to worry about pleasing everybody.”

Continue reading this article in the Good Times: http://www.gtweekly.com/index.php/santa-cruz-news/good-times-cover-stories/6746-the-binding-of-edmund-mcmillen.html