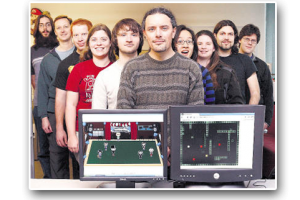 Professor Michael Mateus, Director of the Center for Games and Playable Media at UCSC, with students.

With the Princeton Review’s announcement that UC Santa Cruz’s Games and Playable Media graduate program ranked seventh in the nation on its list of “Top 25 Graduate Schools to Study Game Design for 2014”  — the only UC school mentioned in the list — and a number of gaming companies and developers calling Santa Cruz home, like Edmund McMillen of Team Meat, and Michael Roush, cofounder of Gaijin Games, the garden of gaming in Santa Cruz seems tilled and ready for growth.

In this week’s Santa Cruz Tech Beat, we explore some of the gaming stars rooted in Santa Cruz and UCSC, and what they think about the future of the local gaming industry. 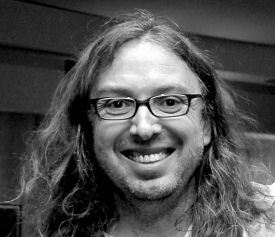 Enter veteran game developer Graeme Devine. With over 30 years of experience in game design and development, Devine is currently putting his skills to work as VP of of Games at Magic Leap, a company that is shrouded in mystery. Although Magic Leap is based out of Florida, Devine works from NextSpace in Downtown Santa Cruz, and believes that our beachside community is an ideal setting for game developers to flourish.

“Santa Cruz is special to me, there is a spirit to the people here, and a genuine wish to make the world better. What better place is there to make the next generation of games and entertainment than right here in Santa Cruz? Let’s change the world!”

With a direct hand in the evolution of gaming since 1981, Brenda Romero, or as she was formerly known, Brenda Brathwaite, became a part of the award-winning gaming program at UCSC, first as game designer in residence, and then as program director in 2013. Best known for her work on games like the Wizardry series and Playboy: The Mansion, Romero is no stranger to higher education as she served as a chairperson for interactive design and game development at Savannah College of Art and Design in 2008. 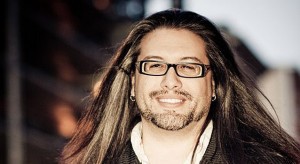 Widely known for his development work on games such as Wolfenstein 3-D, Doom, and Quake, game designer, programmer, and developer, John Romero has partnered with his wife Brenda at the UCSC Center for Games and Playable Media as the program’s creative director. With their combined wealth of experience, the Romero’s may bring the Center of Games and Playable Media at UCSC to the next level. 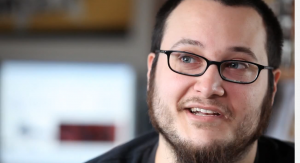 Santa Cruz born Edmund McMillen, who was feature on the documentary Indie Game: The Movie, earned his gaming fame through his brainchild, Meat Boy, and the sequel, Super Meat Boy, which was released on XBOX 360 in 2010 and subsequently on Mac and PC formats in 2011. A truly independent game designer, McMillen works from his home office with his wife, Danielle, who creates plush toys based off the characters in Edmund’s games.

Although McMillen recognizes that Santa Cruz does contain a number a game developers, he feels that the community could do more to promote the local gaming industry.

As a Santa Cruz-based game designer for nearly a decade, Michael Roush, cofounder with Alex Neuse of Gaijin Games, whose headquarters lies in Cruzio Works in Downtown Santa Cruz, has high hopes for the future of the local gaming industry. Gaijin Games has developed the award winning game series, Bit.Trip, and continues to develop new titles for a variety of platforms. 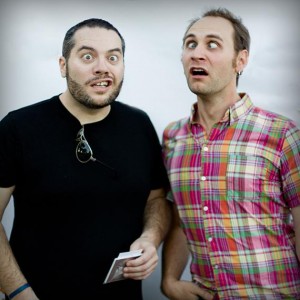 Roush points to the rich history of game development in Santa Cruz with now defunct companies like Osiris and TKO, and to current gaming studios like Team Meat and Chronic Logic.

“I am very fascinated by this history, because very few people know about it in the area. I almost feel as if we will just be known for surf and skate and there is not much room left for this industry,” says Roush in an email to Santa Cruz Tech Beat. “I will say, this is an industry that generates millions of dollars and I personally wish we could bring more of this revenue and creativity to Santa Cruz.”

Chronic Logic, owned by Josiah Pisciotta, is a Santa Cruz-based gaming studio best known for its game, Gish, whose featured protagonist is a sentient ball of tar on a mission to save his human 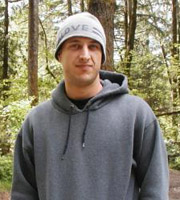 girlfriend. Pisciotta, who developed the Gish game with Edmund McMillen and others, highlights the fact that Santa Cruz is not currently a hub for the gaming industry, but hopes this will change in the future.

“With UCSC having a strong game program and it being a very desirable place to live I think it would be easy find developers here in Santa Cruz,” says Pisciotta.

As the Center for Games and Playable Media graduate and undergraduate programs at UCSC grow with the leadership of individuals like Jim Whitehead, who helped create the Computer Game Design program, and director Michael Mateas, known for his AI development work and for the game Façade, (available for free download here) coupled with locally based game developers such as Pisciotta and Devine, the future of the local gaming industry could be on the verge of growth, but only time will tell.

Watch out for further coverage of the gaming program at UCSC in the coming weeks as Santa Cruz Tech Beat explores more of the program’s key players, and the Center for Games and Playable Media’s origins and expansion.