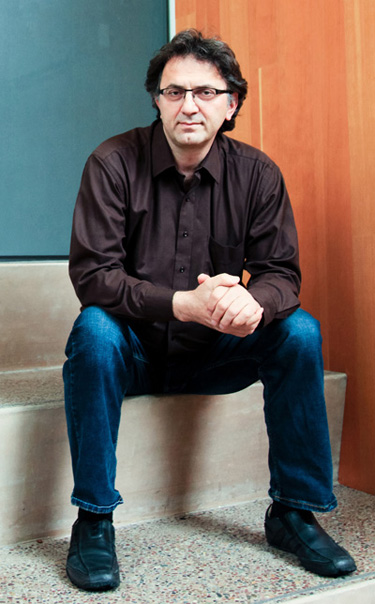 (Photo above: Nader Pourmand, professor of biomolecular engineering at UC Santa Cruz, is one of 16 finalists in Phase 1 of the Follow that Cell Challenge organized by the National Institutes of Health. Credit: C. Lagattuta)

Nader Pourmand, professor of biomolecular engineering at UC Santa Cruz, is one of 16 finalists in Phase 1 of the Follow that Cell Challenge organized by the National Institutes of Health.

The goal of the challenge is to stimulate the development of new tools and methods that will enable researchers to predict the behavior and function of a single cell in complex tissue over time. This ability could help reveal valuable information such as how cells transition from a healthy to diseased state, or identify changes that influence a cell’s responsiveness to treatment.

Pourmand was one of five prize winners selected to receive monetary prizes totaling $88,000. The winners will now advance, along with the other 11 finalists from Phase 1, to the challenge’s second phase, which requires innovators to generate proof-of-concept data.

Pourmand’s proposal is based on the nanopipette technology his lab developed, which allows researchers to take miniscule samples from inside a cell without affecting the activity or viability of the cell. The nanopipette can take many repetitive cell samples over a period of minutes, hours, days, or weeks. These small samples can then be analyzed to monitor changes in gene expression that occur as a cell ages or undergoes other changes.

Pourmand said he plans to use the nanopipette technology in combination with powerful nanogenomic technology, also developed in his lab, to monitor genomic changes in breast cancer cells over time. The studies will focus on the molecular basis of drug resistance in breast cancer cells to understand how resistance is maintained in growing tumors and how resistant cells revert to drug sensitive cells.

“We believe these studies will provide fundamental information on the basis for chemotherapy resistance and sensitivity which could not be obtained using any other technology,” Pourmand said.

Winners of Phase 2 will be awarded prize money from a pool of $400,000, to be announced July 31, 2017. The Phase 1 prize winners will be presented and recognized as part of the 3rd Annual Single Cell Analysis Investigators Meeting, which is scheduled for April 20-21, 2015, at the Natcher Conference Center on the NIH Campus in Bethesda, Maryland.