Raising a glass (and funds) for research 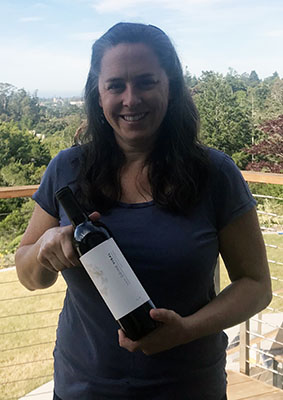 Michael Phillips had been looking for an eye-catching, thoughtful way to honor the groundbreaking and lifesaving work of his daughter, the virologist Rebecca DuBois, UC Santa Cruz associate professor of biomolecular engineering.

That’s why he and his brother, David, decided last year to put a stylized picture of a viral protein on their new bottles of “Going Viral” Merlot.

“Capturing the atomic view of the fight between humans and viruses, ‘Going Viral’ embodies Dr. Phillips-DuBois’s passion in developing new vaccines and antiviral therapies to cure childhood infections,” according to their company’s website.

The design was a striking and refreshing alternative to the imagery of forests, antlers, and mountain glens that make so many bottle labels so sleepy, safe, and boring.

But the timing turned out to be a huge problem.

Just before they were going to release their “Going Viral” wine this year, the COVID-19 epidemic swept the world. Michael and David were in a bind. What if wine buyers thought the Phillipses were using the virus protein as a glib reference to a global tragedy? What if connoisseurs mistakenly believed the brothers were trying to capitalize on a pandemic?

“My family realized, there was no way they could release the wine,’’ DuBois said with a laugh. “The optics of that would have been bad.”

Then came a flash of insight and a bold new plan. What if the Phillipses went ahead and released the wine anyhow, with the same label and the name, but with a brand-new twist?

Instead of trying to disassociate themselves from COVID-19, they would donate all the proceeds from “Going Viral” to DuBois’s lab, which is developing a serological test to measure the levels of antibodies in people who have recovered from the coronavirus or in people who are taking experimental vaccines.

DuBois and her lab colleagues are using this test to evaluate the percentage of infections at UC Santa Cruz and in the community. She also hopes this test can be useful to evaluate the efficacy of vaccine candidates.

This campaign was a calculated risk, but the Phillips family has a hit on their hands. Customers have been rushing to buy “Going Viral.”

The Merlot grapes come from the Lodi vineyard where DuBois’s great grandmother grew up. The wine is aged in French oak, and has tasting notes that include “aromas of huckleberry and Bing cherry with a hint of cocoa and caramel on the nose,” along with “flavors of blackberry jam, dried cranberry and toasted baguette,” according to the winery website.

The Phillipses’ decision to pivot and turn the wine into a fundraiser was a complete surprise to DuBois.

“It’s just amazing to have the support of my family and my hometown community,” DuBois said. “To see everybody coming out to enjoy the wine in support of COVID-19 research is incredible.”

DuBois comes from generations of grape growers. Her sister and brother both work for the winery.

“It is definitely a family business,” said DuBois, who described herself as “a little bit of a black sheep in my family—with their full support.”

The partnership has drawn inquiries from newspapers as well as wine publications. All the attention was a bit overwhelming for the soft-spoken DuBois, who is accustomed to lots of quiet time in the lab, getting work done and social-distancing at the same time.

“I’m not used to all this press,” DuBois said.

Michael Phillips is grateful for the customer support and the chance to collaborate with his daughter, who grew up in Lodi.

“She loves research and is out to save the world,” Phillips told Wine Business Monthly. “That’s the big news in our family: us being proud of her and having her wine be successful and having people be enthusiastic about doing her work, a great thing to donate to as a winery.”