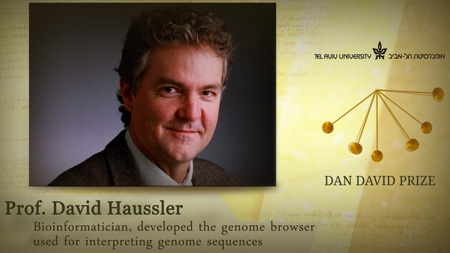 David Haussler, professor of biomolecular engineering and director of the Genomics Institute at UC Santa Cruz, has been chosen to receive the Dan David Prize, a prestigious international award endowed by the Dan David Foundation and based at Tel Aviv University. Haussler will share the $1 million prize with two other leaders in the field of bioinformatics.

The Dan David Prize recognizes and encourages innovative and interdisciplinary research that cuts across traditional boundaries and paradigms. It aims to foster universal values of excellence, creativity, justice, democracy and progress and to promote the scientific, technological and humanistic achievements that advance and improve our world. Haussler and the other laureates will be honored at a ceremony in Tel Aviv on May 17, 2015.

The prize recognizes human achievement in three areas: the past (fields that expand knowledge of former times); the present (achievements that shape and enrich society today); and the future (breakthroughs that hold great promise for improvement of our world). Each year an international board chooses one field within each time dimension.

In addition to Haussler, the 2015 laureates for the future time dimension in the field of bioinformatics are Michael Waterman, a professor of biological sciences, computer science, and mathematics at the University of Southern California, and Cyrus Chothia, an emeritus scientist at the MRC Laboratory of Molecular Biology in Cambridge, U.K.

Joseph Klafter, president of Tel Aviv University and chair of the Dan David Prize Board, said in a video announcement of the prize laureates: