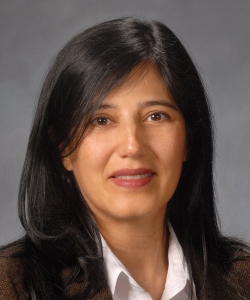 (Photo above: Leila Parsa is Leila Parsa a professor of electrical and computer engineering in the Baskin School of Engineering. Source: UCSC)

A team led by Leila Parsa, professor of electrical and computer engineering in the Baskin School of Engineering at UC Santa Cruz, has received funding from the U.S. Department of Energy (DOE) to develop an innovative all-electric power train that will help enable net-zero carbon emissions for commercial aircraft.

The $854,000 grant is part of a wider effort by the Advanced Research Projects Agency-Energy (ARPA-E) to develop enabling technologies for long-range carbon-neutral commercial aviation. Parsa’s team includes Keith Corzine, professor of electrical and computer engineering, and researchers at the Air Force Research Laboratory.

The ARPA-E ASCEND program (Aviation-class Synergistically Cooled Electric-motors with iNtegrated Drives) is focused on an all-electric power train as the prime mover for long-range, narrow-body aircraft such as the Boeing 737. Current electric power trains do not have high enough power density and efficiency to meet the requirements for this class of aircraft.

Parsa’s team proposes to use innovative technologies for every aspect of the power train.

“All three components—the electric motor, the power electronics, and the thermal management system—will require innovative designs to get to an ultralight and highly power-dense system,” Parsa said.

Their plans include a flux-switching motor with superconducting field coils, which has been shown to be smaller and lighter than conventional designs. The electronics are based on state-of-the-art multilevel inverter technology leading to improved efficiency and lower electromagnetic noise. The cooling technology is a hybrid system containing ultralight cryogenics as well as traditional air cooling methods.

Carbon dioxide emissions per passenger from commercial air travel are nearly double that of any other widely used transportation mode. The narrow-body (single-aisle) commercial aircraft targeted in this research program are estimated to be responsible for nearly half of aviation-related greenhouse-gas emissions. Such an aircraft with an all-electric propulsion system operating on carbon-neutral liquid fuels, however, would have net-zero emissions.

“The goal is to reduce emissions, as well as the energy costs, of commercial air travel,” Parsa said. “Our team is excited to work on this challenging project because of its transformative nature and real-world applications.”

A related ARPA-E program (Range Extenders for Electric Aviation with Low Carbon and High Efficiency, or REEACH) focuses on the energy storage and power generation sub-systems for electric aircraft. DOE has announced a total of $33 million in funding for 17 projects in Phase 1 of the ASCEND and REEACH programs.