How to sequence a banana slug genome 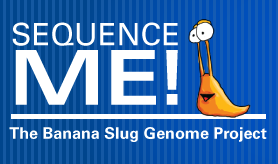 “Obviously, if anyone is ever going to determine the genome of this terrestrial mollusk, it will UCSC, and the sequencing will be done because it is a cool thing to do, not for monetary gain.” — Kevin Karplus

A few years ago, I taught a Banana Slug Genomics course, based on some sequencing done for free as a training exercise for a new technician. I’ve mentioned the course occasionally on this blog: 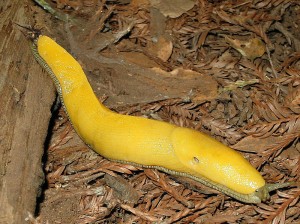 The initial, donated sequencing runs did not produce enough data or high enough quality data to assemble the genome to an annotatable state, though we did get a lot of snippets and a reasonable estimate of the genome size (about 2.3GB total and about 1.2GB unique, so a lot of repeats). All the class notes are in a wiki at https://banana-slug.soe.ucsc.edu/) and the genome size estimates are at https://banana-slug.soe.ucsc.edu/bioinformatic_tools:jellyfish.

I did manage to assemble the mitochondrion after the class ended (notes at https://banana-slug.soe.ucsc.edu/computer_resources:assemblies:mitochondrion), but I now think I made a serious error in doing the assembly, treating variants due to a heterogeneous mitochondrial population as repeats instead. The mitochondrion was relatively easy, because it is much shorter than the nuclear genome (probably in the range 23kB to 36kB, depending on whether the repeats are real) and has many more copies in the DNA library, so coverage was high enough to assemble it—the hard part was just selecting the relevant reads out of the sea of nuclear reads.

Not the sort of organism that funding agencies love

The banana slug genomics class has not been taught since Spring 2011, because there was no new data, and we’d milked the small amount of sequence data we had for all that we could get for it. I’ve played with the idea of trying to get more sequence data, but Ariolimax dolichophallus is not the sort of organism that funding agencies love: it isn’t a pathogen, it isn’t a crop, it isn’t an agricultural pest, and it isn’t a popular model organism for studying basic biology. Although it has some cool biology (only capable of moving forward, genital opening on the side of its head, penis as long as its body, sex for up to 24 hours, sometimes will gnaw off penis to separate after sex, …), funding agencies just don’t see why anyone should care about the UCSC mascot.

Obviously, if anyone is ever going to determine the genome of this terrestrial mollusk, it will UCSC, and the sequencing will be done because it is a cool thing to do, not for monetary gain. Of course, there is a lot of teaching value in having new data on an organism that is not closely related to any of the already sequenced organisms—the students will have to do almost everything from scratch, for real, as there is no back-of-the-book to look up answers in.

At one point I considered asking alumni for donations to fund more sequence data, but our dean at the time didn’t like the idea (or perhaps the course) and squelched the plan, not allowing us to send any requests to alumni. When the University started getting interested in crowd funding, I started tentative feelers with development about getting the project going, but the development people I talked with all left the University, so the project fizzled. I had a full teaching load, so did not push for adding starting a crowd-funding campaign and teaching a course based on it to my workload.

This fall, seemingly out of nowhere (but perhaps prompted by the DNA Day celebrations last spring or by the upcoming 50-year anniversary of UCSC), I was asked what it would take to actually get a complete draft genome of the slug—someone else was interested in pushing it forward!  I talked with other faculty, and we decided that we could make some progress for about $5k–10k, and that for $20k in sequencing we could probably create a draft genome with most of the genes annotated. This is a lot cheaper than 5 years ago, when we did the first banana slug sequencing.

And now there is a crowd funding campaign at http://proj.at/1rqVNj8 to raise $20k to do the project right!

They even put together this silly video to advertise the project: