What can Santa Cruz learn from Santa Barbara? 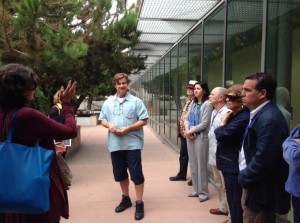 Last weekend (September 4-6) a collection of Santa Cruzans visited Santa Barbara with the intent of learning from the sister City/County/UC how they’re tackling public policy challenges very similar to our own. The trip was the latest in an annual series called the Community Leadership Visit put together by the Santa Cruz Chamber of Commerce. Among the business owners and public officials attending were Lynn Robinson (Mayor, City of Santa Cruz), Alex Clifford (General Manager, Santa Cruz Metro), Bud Colligan (Central Coast Angels) and Jeanne Howard (Publisher, Santa Cruz Good Times). Robert Singleton and I (Manu Koenig) had the pleasure of joining to represent Civinomics.

It was striking just how similar our two regions are in everything from transportation to homelessness to economic opportunity. Even more striking is the simple fact that the public policy options Santa Barbara is employing to deal with these issues are not new. They’re also not necessarily specific to a California beach town. The 2012 Community Leadership Visit to Boulder Colorado revealed all of the same problems and potential solutions. Having been on both trips, it’s starting to feel like some of these solutions are not a matter of if but when; that success for the Santa Cruz region is not a matter of creativity, but rather enough political cohesion to implement clear strategies to move forward.