The change to Choice Provisions, and Mike Roush on the philosophy of life, happiness, and cannibalism

A Case of Identity Crisis 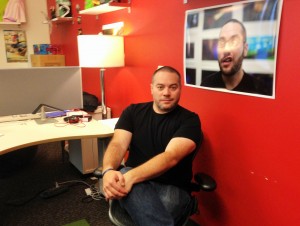 Choice Provisions cofounder, Mike Roush, a self-described sci-fi nerd and Dr. Who fan, is eager to expand the company’s legacy.

Choice Provisions, formerly known as the Santa Cruz game company Gaijin Games, is exploring new frontiers in the gaming industry and outer space. Gaijin Games was known for the nostalgic arcade style of their Bit-Trip Saga games. The change to Choice Provisions will usher in three-dimensional graphics and stories of space exploration. Cofounder Mike Roush, a self-described sci-fi nerd and Dr. Who fan, is eager to expand the company’s legacy.

“There is this human need to continue exploration,” says Roush, “I will never go to Mars and that makes me very sad because I want humanity to spread out a bit. This is sort of my way to access Mars.”

Instead of negotiating a costly legal dispute, Gaijin Games became Choice Provisions. Gaijin also roughly translates to a negative term for “foreigner” in Japanese, which Roush was happy to leave behind. “I wasn’t a super big fan of it because it has derogatory connotations,” he explains.

The change is not going to be in name only. In the age of eighty-hour long, high-graphics games, the short and simple Bit.Trip saga was refreshing. Gaijin found a large market in platforms such as iOS and Android. People enjoyed the quick escapes on their smart-phones. The synesthetic intertwining of the game’s colors and music also distinguished Gaijin as an artful indie game producer.

Developing games like Woah Dave! and Destructamundo will stay true to the arcade style of the Bit.Trip Saga, but Tharsis and Laserlife will intrepidly enter the world of three-dimensional graphics, more elaborate play systems, and space travel.

Tharsis and Laserlife examine survival and the value of human existence. Tharsis is about a space mission. The crew is searching for a mysterious object from the Tharsis region of Mars that will somehow save earth. On the way over, an asteroid smashes the ship. Saving humanity will take sacrifice and planning.

Roush pulls up an incomplete version of the game on his laptop. The crippled ship drifts over a star-scape, far from the comforts of oxygen. The name change has not affected their ear for excellent music. Despite the gravity of the player’s decisions, the music is as serene and beautiful as cosmos in the back drop.

“It [the music] kind of defines our studio. That’s not changing,” says Roush.

A player will balance ship repairs, life support, supplies, health, and morale. Perhaps the most realistic aspect of the game is the dependency on dice rolls. The player will roll dice at the beginning of each round. The dice need to be high enough to counteract whatever damage to the ship or crew arises. The number of dice in a round is determined by the amount of supplies. Supplies can be grown in the green house with the investment of a few dice. Dice can also go towards research on the mission’s esoteric trajectory.

Foresight and prioritization will help the crew survive. True to life though, bad luck can back the crew into a corner. They may even need to take desperate measures, like cannibalism.

The Will to Survive 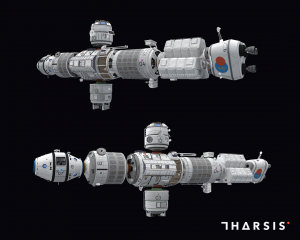 The crew in Tharsis will try to survive on the damaged ship, the Aporea. The ship is divided into several compartments that each play a key role in the crew’s survival. (Photo credit: Choice Provisions)

Roush based Tharsis’ struggle on the crew of an 1820’s whaling ship called The Essex. Like in Tharsis, the ship was critically damaged. An angry whale destroyed their instead of a meteor. Some of the crew survived in small accessory boats on meager supplies and eventually cannibalism.

“By the end of it, they found the boat, and there was just two guys left sucking the marrow out of bones. The first thing that popped into my mind was there’s so many parallels to space. It’s like the will of humans to do whatever they can to survive,” explains Roush.

Since Tharsis’ crew is made of the best astronauts on earth, the astronauts are international. Players will choose five in-play characters out of four women and four men from around the world, including Africa, Asia, Latin America, and the Middle East. The diversity departs from typical character options in games, where women and people of color are sorely under-represented.

The name Tharsis even evokes the word catharsis, which in ancient Greece meant a cleansing of strong emotions through empathizing with a story’s characters. Guiding the crew’s decisions and watching them endure the consequences may take catharsis to a level unprecedented by even Greek playwrites. Rob Dubbin, who writes for Stephen Colbert, will write the stories that unfold as players roll dice for their crew.

The Reason to Survive 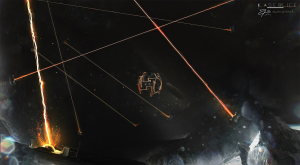 In LaserLife, a mysterious presence assembles molecules to discover the memories of an astronaut. (Photo credit: Choice Provisions)

If Tharsis is a testament to human survival, Laserlife will explain why humanity deserves preservation. An unknown, presumably alien, presence uses lasers to string together molecules and subsequently the memories of an astronaut. The story will go beyond this person’s identity as an astronaut and reach as far back as childhood for memories that define him or her.

“We can’t lose track of how important humanity is, even down to the human experience,” says Roush.

Roush has his own insights about the richness of life. Leaving a stable job that paid six figures for just $20,000 in the game industry came with sacrifice and non-stop work. Roush doesn’t seem to have regrets though. He describes happiness in small moments.

“The wealth of life, I don’t believe it comes from money; it comes from happiness. I know that’s kind of a cliché thing to say,” he says with a laugh. “There are times when I just sit there, and my daughter will come over and give me a kiss on the cheek, and those moments are literally the best thing that has ever happened to me.”

We can only hope to find similar testaments to the complicated nature of human life and happiness in LaserLife and Choice Provision’s future work.

Paige Welsh is a marine biology major and literature minor at UC Santa Cruz. She is also a starting journalist and can be contacted at phwelsh@ucsc.edu.