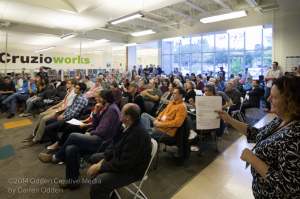 Now in its fourth year, TechRaising is a weekend-long event where everyone from business owners to coding experts come together to share ideas. The ideas range from iPad apps to help teachers with tricky handwriting to caffeine.com’s plan to provide buyers and sellers with a more user-friendly experience when shopping online. Attendees aspired to transform their ideas into realities with demonstrations during the Sunday evening finale.

“It’s kind of like a barn raising. You come together as a community, you build, you help each other out,” said Andrew Mueller, co-founder of TechRaising alongside Rosas and Matthew Swinnerton.

On Friday night, 110 people flooded into the Cruzio offices. Some had dreams of starting their own business, and others were just looking to be part of something. 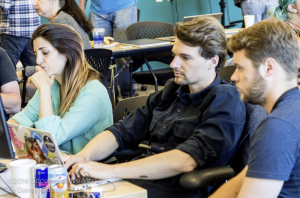 “After the last TechRaising, when we did a better search for craigslist, I think that’s when I came up with the idea that we can just build something better from the ground up,” said Chris Miller, caffeine.com’s leader. Miller aims to make selling and buying online faster, simpler, and more trustworthy with caffeine.com.

Roots in the community

Many of the ideas for products or start-ups were oriented in the community. Rafael Granados pitched his idea for “College Guava,” a company that will develop an app to better prepare students for college by sending them reminders about deadlines and more.

“It’s a sea of information. There are a lot of myths out there,” said Granados. “College Guava is somebody that is constantly watching out for you with your deadlines. Our goal is to build something that students want to really use, and understand the process to go to college.”

In the case of Suzanne and Zohar Wouk, a mother-and-son pair, TechRaising is also an event to bring people together within an even smaller community. Suzanne is creating SnapPost.com, a mobile app which facilitates the posting process on eBay. Zohar is working with a team to create the “Infinity Gloves,” a set of cotton gloves with LED lights used in the rising art form of “light gloving.”

“We’re kind of in the same world,” said Suzanne. “It’s interesting because I’m not the wiser —he’s wiser in terms of tech, so we’re both really helping each other as equals. We’re both going to school at the same time.”

After the pitches concluded, attendees dispersed and segmented into groups to work on their projects. Mueller, Swinnerton and Rosas kept TechRaising’s overall atmosphere of generosity alive by giving teams tokens to hand to people who came forward from other groups to lend a hand. The people with the most tokens won prizes on closing day.

Coming away with “marketing gold”

Saturday was just as charged with energy as Friday, but the feeling was more focused. Participants hunched over laptops, typing furiously, only coming up for food or help with their project. 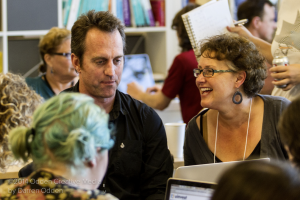 Mentors circled throughout the room and offered advice to groups as they worked.

“Far more valuable than developing a working prototype by the end of the weekend is to develop a presentation that is your marketing gold for the long run,” said Danielle Lanyard, a TechRaising mentor who has worked with multiple hackathons in the past.

“What’s going to be the most ‘sticky’ is the person who stands up there with the most powerful passion around the problem that they’re solving, and their ability to communicate that with people who are going to want to get on board,” she continued.

Participants showed their “powerful passion” Sunday evening, when 18 groups presented demos of their projects. Three panelists provided each team with constructive feedback. And true to TechRaising’s collaborative spirit, they did not rank any of the projects over one another.

“I’m so filled with gratitude for the kindness that everyone has extended,” said Deborah Lindsay, another attendee. Lindsay’s entire family composed her team and helped her build “Crowd Central,” an online service designed to “take the complexity” out of crowd funding.

“I just wish that every aspiring entrepreneur had this opportunity to come together with mentors and supporters and be able to launch into the world of business with such ease, because right now I just feel ready to take off,” she concluded.

Xochitl Rojas-Rocha is a marine biology and literature major at UC Santa Cruz. This summer, she will work as a science writing intern at Science magazine in Washington, D.C. She can be reached at her LinkedIn profile.

To view Darren Odden’s photographs on TechRaising 2014, visit the album.

3 thoughts on “TechRaising 2014: 48 Hours of Innovation, Ambition, and Collaboration”