[Editor’s note: For more about the connection between Magic Leap and Santa Cruz, read How Graeme Devine is going to put Santa Cruz on the map.] 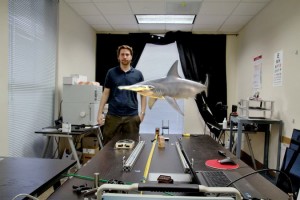 A 3-D animated creature, affectionately named Gerald, appears to walk in circles while floating in front of an elaborate viewer that resembles something from an optometrist’s office. Though only half a foot high, and with four arms, he looks remarkably lifelike through lenses that transmit what computer scientists and optical engineers describe as a “digital light field” into the eyes of a viewer.

The technology, once downsized into a pair of glasses, is intended to overcome the most significant technical challenges blocking an explosion of virtual reality.

Oculus Rift, the crowdfunded start-up acquired by Facebook for $2 billion in March, has been trying to correct this motion sickness. But it is a steep challenge. Nearly 50 years after the computer scientist Ivan Sutherland pioneered head-mounted computer displays, there are more than two dozen companies that have attempted to commercialize various forms of the technology, called near-eye displays, with little success.

Though the industry could radically transform entertainment, gaming and other forms of computing, it has an Achilles’ heel: Many people become queasy after pulling viewing devices over their eyes and slipping into an immersive world that blurs the line between physical reality and computer-generated imagery.