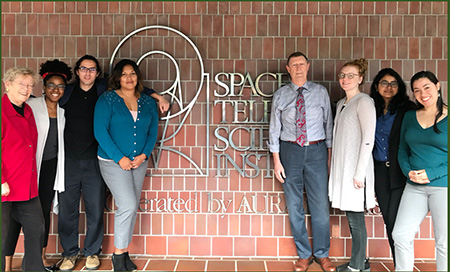 (Photo above: UCSC’s Osterbrock Leadership Program has been training future leaders in the astronomical sciences for the past six years. Source: UCSC)

Graduate education in the physical sciences usually does well at turning out people who can conduct research, write papers, and teach classes. But university departments rarely do much to prepare students for some of the other activities they will likely undertake throughout their careers. When asked to chair a committee, organize a conference, or manage a laboratory, young scientists often have to figure it out as they go.

At UC Santa Cruz, the Donald and Irene Osterbrock Leadership Program has been training future leaders in the astronomical sciences for the past six years. Now, a partnership between UCSC’s Department of Astronomy and Astrophysics and the American Astronomical Society (AAS) is expanding its reach. Thanks to a gift to AAS that provides matching grants, graduate students in astronomy at UC Irvine and Columbia University will have opportunities to get real-world training in scientific leadership and management while earning their doctorates.

Columbia and UC Irvine submitted successful proposals to the National Osterbrock Leadership Program. Funded by a generous gift from the Peter and Patricia Gruber Foundation, this new national program provides up to $40,000 annually in total matching funds and is jointly administered by the AAS and UCSC.

“The NOLP is a game changer,” said Robert Williams, former director of the Space Telescope Science Institute and a member of UCSC’s OLP Mentors Circle. “It will provide graduate students the opportunity to develop leadership skills early in their careers in projects that have a real and positive impact on science.”

Columbia’s proposal, entitled “Inclusive Leadership for Astronomy’s Future,” is spearheaded by Professor David J. Helfand, past chair of the Department of Astronomy and past president of the AAS. Columbia plans to train two cohorts of five fellows each—one group during the first two years, and the second group during the subsequent two years.

Among the major features of the program, the fellows will participate in a series of workshops on management skills, ethical leadership, conflict resolution, and oral and written communication skills useful for addressing different audiences such as scientists, the public, and policy makers. These workshops will be designed around cultivating an inclusive leadership style that equips fellows to navigate and lead the diverse workforce of the future. In order to put into practice the leadership skills they’re acquiring, each fellow will write a proposal to develop a product or activity that they will lead during the tenure of their fellowship.

“While we’ve occasionally run bits and pieces of this program in the past, the NOLP provides us with the opportunity to bring in colleagues from Columbia’s leading business, law, and education schools,” Helfand said. “It also will enable us to bring in alumni who hold leadership positions in the private sector, to offer a comprehensive program that will prepare our graduates for leadership roles in our field.”

UCI’s proposal, “Physics & Astronomy Community Excellence (PACE),” is led by Stephanie Sallum, assistant professor of physics and astronomy. It will train 16 fellows in decision-making, team management, content development, active listening, and professional communication through a program focused on effective peer mentoring. This will leverage resources already in place at UCI, which recently launched a program that pairs senior graduate students with first-year students to provide mentoring in areas such as time and goal management, finding and fostering healthy relationships with advisors, preparing for the qualifying exam, and exploring various career paths.

As part of their leadership training, the UCI fellows will earn a certificate in mentorship excellence from the UCI Graduate Division and then help manage the peer-mentoring program, advise other mentors, and organize workshops for mentors, mentees, and their faculty advisors.

“We are so excited to have been selected as a NOLP node,” Sallum said. “It’s such a nice validation of the peer mentoring program created by our graduate students. The NOLP will help make peer mentoring at UCI more sustainable, and it will enable us to include mentorship from leaders in the field. I can’t wait to see its impact on the students.”

Both Columbia and UCI aim to develop curricula and other materials based on their pilot programs to encourage and facilitate the creation of similar programs at other institutions. Like the National Osterbrock Leadership Program itself, they will help meet the goal of making leadership and management training the rule, rather than the exception, for graduate programs in the astronomical sciences.

AAS President Paula Szkody (University of Washington) said, “The AAS hopes to expand the NOLP to more institutions based on the outcomes of the current pilot program and on successful future funding efforts.”

The National Osterbrock Leadership Program is named for Donald E. Osterbrock (1924-2007), eminent professor of astronomy at UCSC and a former director of Lick Observatory, and his wife Irene Hansen Osterbrock (1926-2019), who helped establish the UCSC Library’s Mary Lea Shane Archives at Lick Observatory as a world-renowned repository of US astronomical history. Don Osterbrock received the AAS’s highest honor, the Henry Norris Russell Lectureship, in 1991, and Irene was named a Patron of the AAS in 2011.