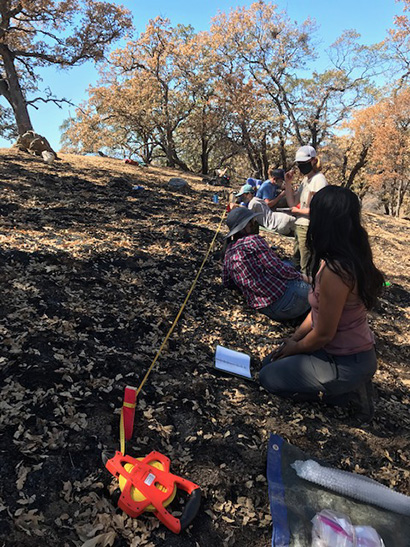 The SCU Lightning Complex Fire swept through the oak woodlands of the Blue Oak Ranch Reserve on Mt. Hamilton as a low, quickly moving grass burn, sparing the reserve’s buildings and most of the oak trees.

But the August 20 blaze caused serious losses at a watershed research site established in the reserve by Margaret Zimmer, assistant professor of Earth and planetary sciences at UC Santa Cruz. An extensive array of hydrological instruments installed at the site by Zimmer’s Watershed Hydrology Lab in 2018 and 2019 was destroyed.

Zimmer quickly realized, however, that the fire had created an unprecedented opportunity to study the impact of fire on a watershed immediately after it has burned. With funding from a Rapid Response Research grant from the National Science Foundation (NSF), her team is now working hard to rebuild and reinstall wells and instrumentation on the site, known as the Arbor Creek Experimental Watershed.

The focus of the new project is to understand how burned material, carbon, and nutrients move into streams and get flushed out of the watershed when the first rains fall on the burned landscape this winter.

“When a landscape burns, it produces charcoal and soot, called pyrogenic carbon, which behaves differently than unburned carbon,” Zimmer explained. “We want to know how it moves and where it goes. Fire also affects essential nutrients like nitrogen, so we want to see how nitrogen is exported from the watershed.”

Previous studies have looked at watershed hydrology a year or two after a fire, but Zimmer said she’s not aware of any study that has been able to capture the first flush of nutrients and pyrogenic carbon from a fire-impacted landscape. Zimmer’s team will be able to capture this first flush in large part because the streams in this landscape are not perennial, meaning they are currently dry and will not carry streamflow until after it rains.

“We have a unique opportunity with this field site, where we already have data from before the burn and can track what happens in the aftermath,” Zimmer said. “The immediate response is critical, because at this point it’s a completely charred landscape, and we want to know if the majority of the exported material gets flushed out by the first precipitation event, or during the first winter, or does it take longer. That has big implications for how ecosystems recover after a fire.”

It also has implications for water quality downstream from the burned landscape, she added. The site’s watersheds drain to drinking water resources used by about 2 million people in the San Jose region.

“Downstream water users want to know when to expect large amounts of sediments and nutrients washing down from burned areas,” said Zimmer, who collaborates with hydrologists at the Santa Clara Valley Water District.

The NSF grant enabled the team to acquire a powerful new instrument—a field-deployable spectrophotometer—which they can use to monitor suspended sediments and dissolved carbon and nitrogen in surface water and groundwater. A multi-source pump system will collect samples from up to 12 different locations at the confluence of two watersheds and deliver the samples to the spectrophotometer, providing measurements at regular intervals less than an hour apart.

“Historically, we would have to collect water samples and send them out to a lab, so with this system deployed in the field we can get much higher resolution data,” Zimmer said.

The team will still collect samples for laboratory analysis to calibrate and validate the sensor measurements. Zimmer’s collaborator on the project, Sasha Wagner of Rensselaer Polytechnic Institute, will lead the lab-based chemical analysis work. The project will support the research efforts of UCSC graduate students Lauren Giggy and Amanda Donaldson and technician Peter Willits.

The Blue Oak Ranch Reserve, located near Mt. Hamilton in the Diablo Range east of San Jose, is one of 41 reserves in the UC Natural Reserve System.