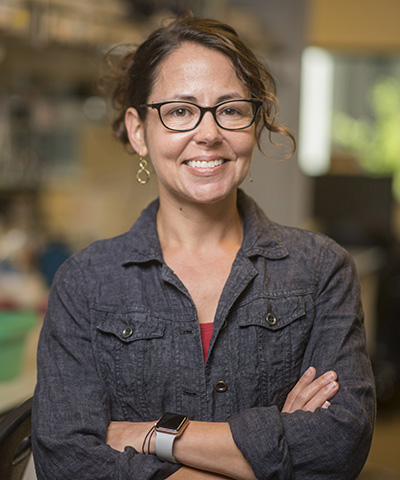 Beth Shapiro, professor of ecology and evolutionary biology at UC Santa Cruz, is among 19 top scientists selected by the Howard Hughes Medical Institute (HHMI) to become HHMI investigators and receive the support needed to move their research in creative new directions.

Shapiro is a leader in the field of ancient DNA, using genetic material recovered from the remains of plants and animals that lived long ago to study evolution and explore how species and ecosystems have changed over time. She isolated the oldest DNA yet recovered—from a 700,000-year-old horse bone—as well as the oldest viral DNA and RNA, and she was the first to apply ancient DNA in population genetics. Much of her work over the past 15 years has focused on the large mammals that lived in the Arctic long before humans colonized North America, including woolly mammoths, ancient horses, bears, and bison. This research can provide valuable insights into how species and ecosystems responded to rapid global warming at the end of the last ice age.

Shapiro’s Paleogenomics Lab at UC Santa Cruz has been at the forefront of ancient DNA research and continues to develop new and more efficient methods to recover and analyze trace amounts of DNA left behind by ancient organisms.

“In the early days, it was all big mammals with big bones that were frozen in the Arctic. With improvements in technology, we can now start getting DNA from smaller animals, from plants, and from temperate regions,” Shapiro said. “Improving efficiency is the big thing. If we can get DNA from more poorly preserved remains, then we can expand the temporal range, the geographic range, and the species range of our studies.”

Advances in the recovery of DNA from environmental samples such as ancient sediments offer exciting new opportunities to catalog past biodiversity and study how communities of organisms evolve over time. “We can take sediment cores from lakes or frozen soil and ask who was present when and where, and how that changed over time. These data will provide the first true insights into how ecosystems evolve over geologic time,” she said.

The author of an award-winning book, How to Clone a Mammoth, Shapiro has been a leading voice in discussions of the use of genetic engineering tools for biodiversity conservation and, potentially, for the resurrection of extinct species. She was named a MacArthur Fellow in 2009 and a Packard Fellow and National Geographic Emerging Explorer in 2010, among other awards and honors. In 2017, she won support from the HHMI Professors Program for innovations in science education.

“Every scientist is unique, but they all need one thing: time,” said HHMI President Erin O’Shea. “HHMI is dedicated to providing outstanding biomedical scientists with the time and resources to do their best work. We think of this as investing in people, not just projects.”

The Howard Hughes Medical Institute plays an important role in advancing scientific research and education in the United States. Its scientists, located across the country and around the world, have made important discoveries that advance both human health and our fundamental understanding of biology. The institute also aims to transform science education into a creative, interdisciplinary endeavor that reflects the excitement of real research.