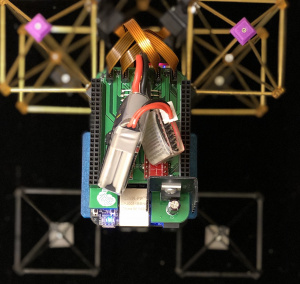 Controlling a robot’s movement typically requires laborious programming. A team of UC Santa Cruz researchers in the Braingeneers group are applying a different approach, using a sophisticated simulation of a biological system to control a flexible robot.

The results have been published in the October 21st, 2020 issue of Plos One.

“This is a great example of the interdisciplinary research done at UC Santa Cruz,” co-author Maryam Tebyani, computer engineering Ph.D. student said. “It’s a combination of robotics and neuroscience.”

“What we’re trying to do,” said first author Alex Spaeth, Ph.D. student in computer engineering, “is to take a simulation of the computational activity of neural cells (a network of cells capable of learning and adapting) and attach it to a hand designed system.”

Tebyani created the robot while Spaeth designed the network.

“Putting it all together was definitely a joint effort,” Spaeth said. “We worked side by side.”

Spaeth sees great promise in biological computing systems. “Deep learning can only do so much,” he said. “Biologically inspired computing projects like this one could be the next step in artificial intelligence.”