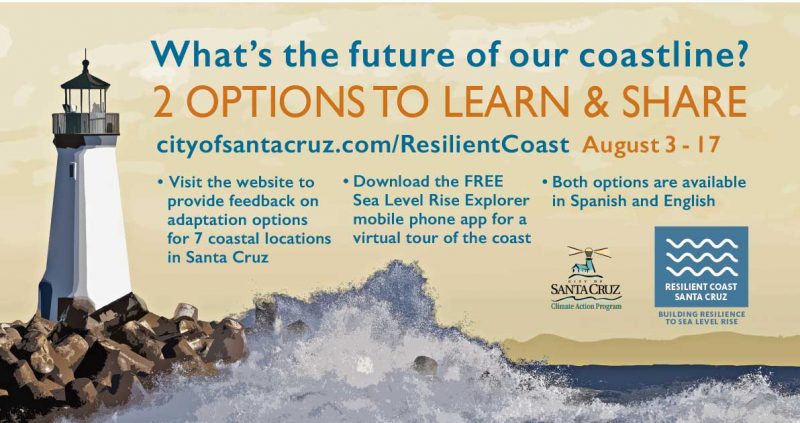 The City of Santa Cruz and Virtual Planet Technologies are pleased to announce the launch of phase two the Sea Level Rise Explorer Santa Cruz interactive experiences. You can download this experience at the Apple and Android Stores for free today!

Users can interactively raise sea levels and watch in real-time the potential impacts on top of hyper-realistic 3D models at three iconic destinations in Santa Cruz: West Cliff Drive, Cowell’s, and Main Beach. More importantly, they can also see relevant solutions including adding more sand to the beach, creating new vegetated sand dunes, and building seawalls, some of the alternatives the city is considering to protect its coastline in the feature. Users follow an easy to understand guided-experience narrated by Dr. Gary Griggs, Distinguished Professor of Earth Sciences at UCSC (English), and Ernestina Saldaña from Santa Cruz, a Civil Engineer turned activist (Spanish).

Building upon the success of the Virtual Reality Sea Level Rise Explorer, which was available at the local public library and attracted more than 400 users. These innovative tools are being developed by Santa Cruz startup Virtual Planet Technologies and will support community engagement and education components of the Resilient Coast Santa Cruz Initiative.

Development steps include flying drones over the areas of land depicted, each drone taking 200-600 photos from the air at each location, then working with “photogrammetry” using GPS, triangulation, and geometry to identify 40,000 points of similarity between the photos. The software then selects 4000 of the best overlapping points in each image to create the final 3D models that are inserted in the VR experience. Working the latest available science, including sea-level rise and coastal erosion models from the USGS, and NOAA, photogrammetry software, and in-house development expertise, Virtual Planet delivers a seamless experience.

The app is available on the Apple Store, and on Android,