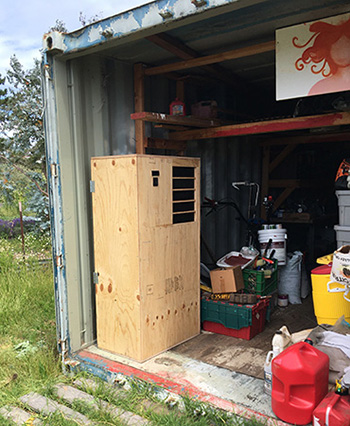 (Photo above: Although unable to complete their initial plans, a team of engineering students was able to finish a prototype of their phone charging station, which is now installed at the Homeless Garden Project. Credit: Jordan Tam)

Students in the Baskin School of Engineering at UC Santa Cruz were racing to finish their senior capstone projects when the COVID-19 pandemic led to a mandatory shelter-in-place order for Santa Cruz County starting in March. The lockdown posed yet another obstacle for student teams that were already grappling with challenging projects.

Senior capstone projects are ambitious, student-led efforts to tackle an engineering problem or create a product or service. Intended to be the crowning achievement of an engineering education at UCSC, the projects may be sponsored by campus organizations or corporations, while others are entirely conceived and executed by students.

Capstone projects revolve around teamwork, which usually means long hours working together in the lab. During the pandemic, however, students were forced to find ways of collaborating on their projects without getting together in person.

One of the most ambitious projects in 2020 was the Indoor Robotics team sponsored by Continental. Their goal was to fuse Continental’s LiDAR, radar, and camera sensor information together into a single coherent “view” of a robot’s surroundings. In other words, they wanted to give a robot a new way of seeing the world and recognizing objects around it.

The team drew up plans to attach the complex sensors to a robot called a Husky UGV, an “unmanned ground vehicle” approximately the size of a wheelchair. Continental provided the robot and sensors. Team members Babak Farahmand, Daniel Luft-Martinez, Mayowa Borisade, Paige Riola, Shealtiel Mulder, and Walter Condori would have to mount the sensors to the robot and interpret the data they collected.

The shelter-in-place order kept students out of the labs, however, so they couldn’t access the robot or the tools they needed to measure its sensor data. Prospects for the team looked grim until Professor Emeritus Patrick Mantey, who directs the capstone program, proposed a solution.

Mantey suggested they enlist Veronica Hovanessian, a graduate student in electrical engineering, as a “coronanaut.”

“We could send her into the lab as if she were an astronaut on a spacewalk receiving instructions from the rest of the team over her headset,” Mantey said.

Hovanessian works with Baskin Engineering Lab Support (BELS), which meant she was one of the few people who had permission to be on campus during the lockdown. She said she was surprised to be summoned to a Zoom meeting with Mantey and Dean Alexander Wolf, who approved the plan.

Integrating the sensors was nerve-wracking work, and Hovanessian was careful to use a meter before connecting the expensive sensors. “Accidentally reversing polarity could cause a sensor’s functionality to stop, or even cause an explosion,” she said.

Once the sensors were attached to the robot and connected, Hovanessian began receiving transmissions from her distant teammates. They wanted her to tell them what the robot was ‘seeing’ through its sensors.

“Typically they would ask me something like “get us some data of what a chair looks like in front of the LiDAR sensor,” Hovanessian said.

The data she gathered was parsed by the rest of the team, who extrapolated conclusions and created models from what she gathered. Hovanessian said she was excited to be able to help the team succeed despite the pandemic.

Most of her teammates are graduating this quarter, which means there’s a good chance she might never meet them in person. “I hope when this is all over we can grab a beer or something to celebrate pulling this off,” she said.

The Smart Seat for Posture Detection team created what they call a “smart seat” to help people maintain good posture while sitting.

This required a great deal of engineering. There were proximity sensors and leaning sensors to wire, not to mention the challenge of creating an attractive, comfortable piece of furniture that someone would consider sitting on every working day. And then the coronavirus outbreak scrambled their plans.

“Testing was the most challenging aspect for us,” Fallahi said. “We needed testbed setups, oscilloscopes, and network analyzers to test the electrical system. During an outbreak that becomes really difficult.”

Their solution was to recreate the UC Santa Cruz labs at home. The engineering school let them borrow a few vital pieces of equipment and provided credits so they could use MATLAB from home. But the team realized they needed more than one team member running tests, so they bought additional tools to enable each member to work independently.

“Costs tripled,” said team member Christopher Cheney. “Initially we drafted it up around $200, now we’re looking at more like five or six hundred.”

Progress was slow without access to the lab, and the assembly became a much more deliberate, meticulous process. The students focused on perfecting their algorithms.

“Software-wise, our end result will probably be better than we originally planned,” said team member Zachary Haughton. “Our prototype won’t be as super nice and presentable as we wanted it to be, but at its core it will work really nicely.”

Communication was a major challenge for the group. “When you don’t have in-person contact, problem solving together takes much longer,” Haughton said. “You can’t just start drawing stuff on the whiteboard. But it certainly wasn’t an insurmountable challenge.”

The team thanked Professors Stephen Peterson and Tela Favaloro for their help with the project. The students hope their research into posture correction could be the start of a business or a partnership with an existing company. For the most part, they managed to hit their goals.

“When we look back at all of this, I think we’ll all be incredibly proud of what we managed to achieve,” Fallahi said.

One team wanted their project to address the problems of homeless people in Santa Cruz. “There are about 2,200 homeless in the county, and we wanted to alleviate some of the stress they feel,” said team member Jordan Tam.

The team began by surveying homeless adults. One of the problems they discovered was that the homeless had very few places to charge their phones.

“Many of them would go into libraries or businesses to look for outlets,” Tam said. “Even in these areas outlets were few and far between.”

Homeless people use cellphones to trade information about resources, and having a fully-charged phone can mean the difference between a hot meal and going to bed hungry. The team partnered with the Homeless Gardens Project, a respected local organization that helps the homeless reintegrate into the community, giving them a job in the gardens and helping them find housing.

“We realized that the Homeless Garden was completely off-grid,” Tam said. “We decided it would be an excellent area to provide power to, so our original plan was to build them a solar-powered charging station.”

The original design included a solar-powered station with six locking compartments so individuals could safely leave their phones to charge while they worked. It was designed to be both theft- and weather-resistant and was to be made of stainless steel and a robust polycarbonate plastic.

Things were looking up. Sandbar Solar donated a large solar panel to the project. The team completed their designs and set aside the final quarter for fabrication, assembly, and integration.

Then the coronavirus struck.

“Sandbar Solar wasn’t considered an essential service,” Tam said, “so they weren’t open, and neither were the plastic and metal shops.”

Fabrication ground to a halt. Then most of the team had to go home. Tam was based out of Danville, and two others remained in Santa Cruz, but one went home to India, which meant the team also to adapt to the time difference.

Other problems arose. Since they couldn’t outsource fabrication, they focused on the designs, preparing the project for the next senior capstone team to take on. They simulated as much as possible, but simulation can only do so much. They weren’t able to test the weatherproofing and theft-resistance, nor were they able to properly debug circuit boards. (The ideal conditions of a simulation rarely measure up to the real world when it comes to circuit boards.

Despite the difficulties, the team was able to create a functional prototype.

“We created a prototype out of medium-density fiberboard, which is a pretty flimsy material, but the Homeless Garden Project asked for anything we could give them,” Tam said.

The Homeless Garden Project plans to place the charger in a weatherproof shed. The team also added a smaller solar panel and a battery, which would allow the machine to work during cloudy days.

Tam said it was hard having to scale back their plans. “We were really sad because we wanted to see a finished end product and to create something that would really help the Homeless Garden project,” he said. “I’m glad we’re giving them something, but it’s a huge step down from what we’d envisioned.”

All three groups said they thought rising to the challenge of working together during the COVID-19 pandemic was an experience that would eventually help them become better engineers. It was a sentiment shared by most of the Senior Design Project teams this year.

More information about the 2020 Senior Design Capstone projects is available online at csspp.soe.ucsc.edu/2020-partners-day.