From smart grids to flying robots, engineer finds many applications for theory 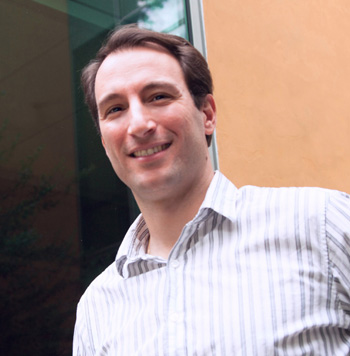 The future of electricity involves a “smart” grid, in which the energy distribution system is fully computerized, with sensors and wireless devices monitoring remote parts of the system and communicating with a central operations center. Automated technology can then adjust and control the components of the grid to improve its efficiency and manage the integration of renewable energy sources.

The intermittency inherent in renewable energy sources such as wind and solar power poses a challenge for electric companies, which must provide a consistent power supply. Smart grid technology could help meet this challenge.

Ricardo Sanfelice, an associate professor of computer engineering at UC Santa Cruz, and his students are developing and testing theories about how to control the flow of electricity through a smart grid. “I have a student writing mathematical equations with one hand and wiring circuits with the other,” he said.

To test their theories on a large scale, the researchers will use a smart grid test bed at Sandia National Laboratories in New Mexico. Sanfelice, who recently moved to UC Santa Cruz from the University of Arizona, said he is also interested in collaborating with local utility companies and other companies working toward the future smart grid.

The complex dynamical behavior of smart grid systems is partly due to the combination of two kinds of behavior: continuous changes and abrupt jumps in currents and voltages. Sanfelice specializes in understanding and controlling such “hybrid systems” in which continuous and discrete behavior is intertwined. Hybrid systems often involve both analog and digital components or so-called “cyber-physical systems,” in which embedded computers and networks monitor and control physical elements or processes.