Posted on May 21, 2020 by Sarah in Events, Featured, Santa Cruz Tech Ecosystem 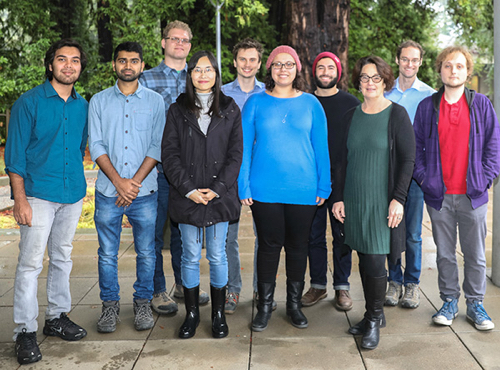 UC Santa Cruz computer science students have advanced to the finals in a prestigious Amazon competition to build a “socialbot” that can converse with humans.

UC Santa Cruz’s Team Athena is one of five teams remaining in the Alexa Prize Socialbot Grand Challenge from a field of 375 applicants from around the world. Competitors included UC Davis, UC Irvine, and UC San Diego; Stanford University, Czech Technical University, and Moscow Institute of Physics and Technology.

The winner will be announced in July.

The UC Santa Cruz team is led by faculty adviser Marilyn Walker, professor of computer science and engineering, and includes seven graduate students and one undergraduate who work in her Natural Language and Dialogue Systems lab. In addition to the team leaders, Davan Harrison and Jurik Juraska, the graduate student members are Kevin Bowden, Jiaqi Wu, Lena Reed, Rishi Rajasekaran and Nikhil Varghese. The undergraduate member is Abteen Ebrahimi. Other faculty members who have assisted the effort are Steve Whittaker (computational media) and Jeff Flanigan (computer science and engineering).

“This team has worked together amazingly well and created a strongly competitive and interesting conversational system,” Walker said.

The group has been working since September on the challenge of creating a bot that can converse coherently and engagingly for 20 minutes with people over Alexa, a virtual assistant developed by Amazon. The bot must be able to discuss such topics as current events, entertainment, sports, politics, technology, and fashion.

“What makes this project so much more challenging is people can say anything next,” Harrison said. “There’s no clear goal, there’s no agenda to provide the dialogue system.”

The bot must recognize different types of speech, understand movie names, song names, people’s names, and now, even know about COVID–19. “It’s such a major topic that we made sure our system can talk to users about that as well,” said Juraska.

All bots in the competition are anonymously tested by Alexa users, who are then asked to give ratings at how well they work. The team members can then review the conversations without names or locations of the users attached.

The users include everyone from children to seniors and encompass people with different walks of life and interests. “It’s been nice seeing the wide applications of the system and the diversity of potential users,” Harrison said.

On a more serious note, the conversations sometimes reveal the users’ emotional state and sometimes show they are depressed. This makes Harrison think that a well-designed socialbot could have a useful effect by offering positive emotional support or feedback.

Working on this project in the midst of a pandemic has offered its own challenges. At first, the team was meeting regularly in person but then everything switched to remote communications when the state shut-down order went into place. Harrison said he definitely misses getting to use office space on campus.

Like everyone else, the team has had to contend with canceled plans, including a trip to Seattle in March to meet competitors and the upcoming finals event, which was supposed to be in Las Vegas.

“We’re lucky that most of our work can continue remotely,” Harrison said.