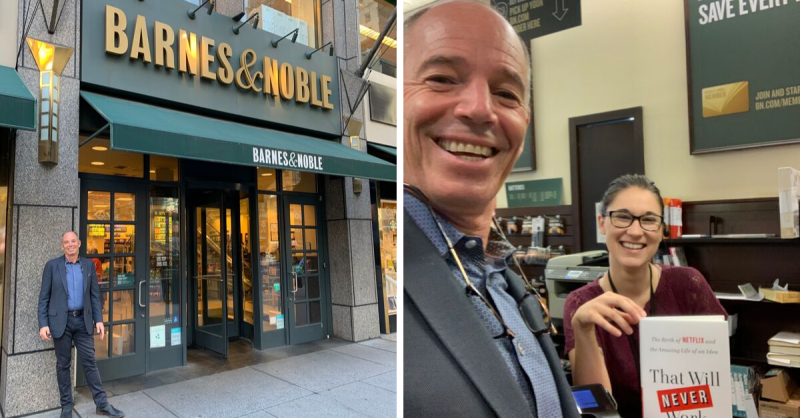 (Photos above: Marc Randolph purchases a copy of his own book on the first day of its release. Source: LinkedIn)

Randolph’s book on Netflix’s earliest days, titled “That Will Never Work,” was released today by Little, Brown and Co.

Netflix Inc. was founded in 1997 by Marc Randolph and Reed Hastings, who brainstormed the idea while commuting over Highway 17 together to their jobs at Pure Atria Corp. in Sunnyvale.

Randolph became Netflix’s first CEO and helped guide what was then a DVD rental company through an IPO in 2002 before amicably parting from the company soon after to pursue his other passions.

In the years since, Randolph, 61, has worked as a public speaker, has continued his work with the National Outdoor Leadership School and has advised local startups including Looker Data Sciences, which he helped found in 2012. He is a resident of Santa Cruz, where he lives with his wife and three children. Randolph’s book on Netflix’s earliest days, titled “That Will Never Work,” was released today by Little, Brown and Co.

He spoke with the Silicon Valley Business Journal about co-founding Netflix, lessons learned over the years, his best tips for negotiating, and more. This interview was edited for brevity and clarity.

SVBJ: In the book you mentioned you and Reed Hastings and your commutes over Highway 17, and that he didn’t like your constant lane changes. Why do you think you and Reed worked as business partners and what did you each bring to the partnership?

MR: What makes great partnerships is complementary skill sets, and Reed and I really hit it off from the beginning, because I think we both respected the things that we brought to the party.

(Sorry, this might be behind a paywall for some readers.)