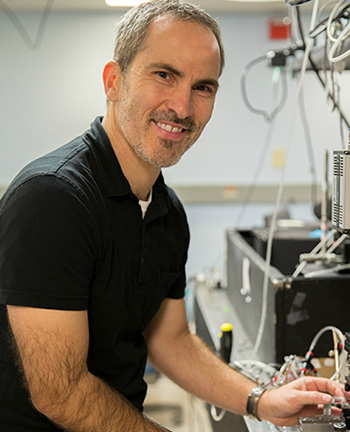 (Photo above: Holger Schmidt has been developing optofluidic chip technology in collaboration with researchers at Brigham Young University, with applications in areas such as biological sensors, virus detection, and chemical analysis. Credit: C. Lagattuta)

A new chip-based platform developed by researchers at UC Santa Cruz integrates nanopores and optofluidic technology with a feedback-control circuit to enable an unprecedented level of control over individual molecules and particles on a chip for high-throughput analysis.

In a paper  published August 16 in Nature Communications, the researchers reported using the device to control the delivery of individual biomolecules—including ribosomes, DNA, and proteins—into a fluid-filled channel on the chip. They also showed that the device can be used to sort different types of molecules, enabling selective analysis of target molecules from a mixture.

The capabilities of the programmable nanopore-optofluidic device point the way toward a novel research tool for high-throughput single-molecule analysis on a chip, said Holger Schmidt, the Kapany Professor of Optoelectronics at UC Santa Cruz and corresponding author of the paper.

“We can bring a single molecule into a fluidic channel where it can then be analyzed using integrated optical waveguides or other techniques,” Schmidt said. “The idea is to introduce a particle or molecule, hold it in the channel for analysis, then discard the particle, and easily and rapidly repeat the process to develop robust statistics of many single-molecule experiments.”

The new device builds on previous work by Schmidt’s lab and his collaborator Aaron Hawkins’ group at Brigham Young University to develop optofluidic chip technology combining microfluidics (tiny channels for handling liquid samples on a chip) with integrated optics for optical analysis of single molecules. The addition of nanopores allows controlled delivery of molecules into the channel, as well as the opportunity to analyze the electrical signal produced as a molecule passes through the pore. This latest work was led by first author Mahmudur Rahman, a graduate student in Schmidt’s lab at UC Santa Cruz.

Nanopore technology has been successfully used in DNA sequencing applications, and Schmidt and other researchers have been exploring new ways to exploit the information in the signals produced as molecules or particles translocate through a nanopore.

With the feedback control system (a microcontroller and solid-state relay) in the new device, real-time analysis of the current turns the nanopore into a “smart gate” that can be programmed by the user to deliver molecules into the channel in a predetermined manner. The gate can be closed as soon as a single molecule (or any number set by the user) has passed through, and opened again after a set time.

“The use of nanopores as ‘smart gates’ is a key step toward a single-molecule analysis system that is user-friendly and can work at high throughput,” Schmidt said. “It allows user-programmable control over the number of molecules that are being delivered to a fluidic channel for further analysis or processing, selective gating of different types of single molecules, and the ability to deliver single molecules into a chip at record rates of many hundreds per minute.”

Using bacterial (70S) ribosomes, the researchers demonstrated controlled delivery of more than 500 ribosomes per minute. Coauthor Harry Noller, the Sinsheimer Professor of Molecular Biology at UC Santa Cruz, has done pioneering research on the structure and function of ribosomes, the molecular machines that synthesize proteins in all living cells, and has been collaborating with Schmidt’s group since 2006.

The researchers also used a mixture of DNA and ribosomes to show the device’s capacity to selectively activate the gating function for a target molecule (in this case, DNA). This can enable, for example, fluorescence experiments on a controlled number of target molecules, while unlabeled particles are ignored and discarded. Selective gating could also be used for purification or sorting of different particles downstream from the nanopore, based on the signals as the particles pass through the nanopore, Schmidt said.

The programmable system allows flexibility for a wide range of potential applications, he said.

In addition to Schmidt, Rahman, Hawkins, and Noller, the coauthors of the paper include Mark Harrington, Yucheng Li, Mohammad Sampad, Laura Lancaster, and Tom Yuzvinsky at UC Santa Cruz, and Matthew Stott at Brigham Young University. This work was funded by grants from the National Institutes of Health and NASA.