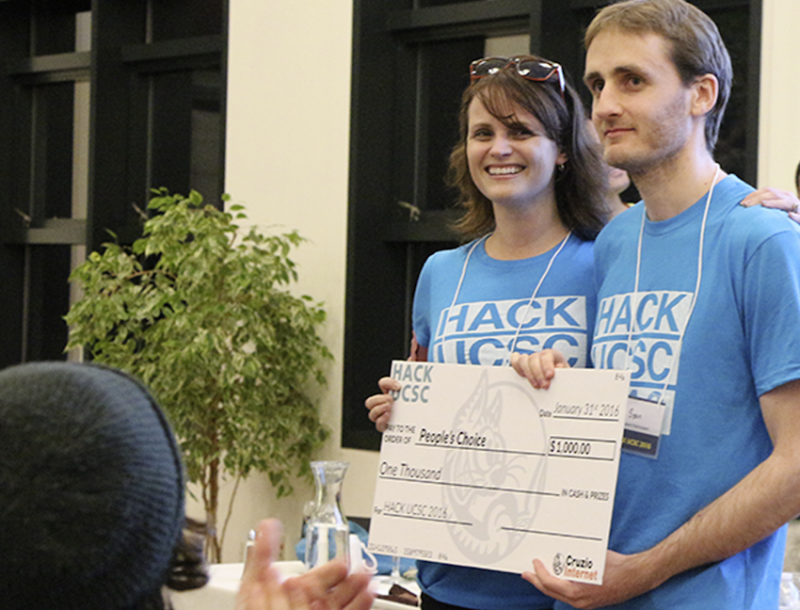 This past weekend Hack UCSC hosted more than 500 students on the university campus who competed for $80,000 in prizes, racing the clock to develop new solutions in apps, software and websites. 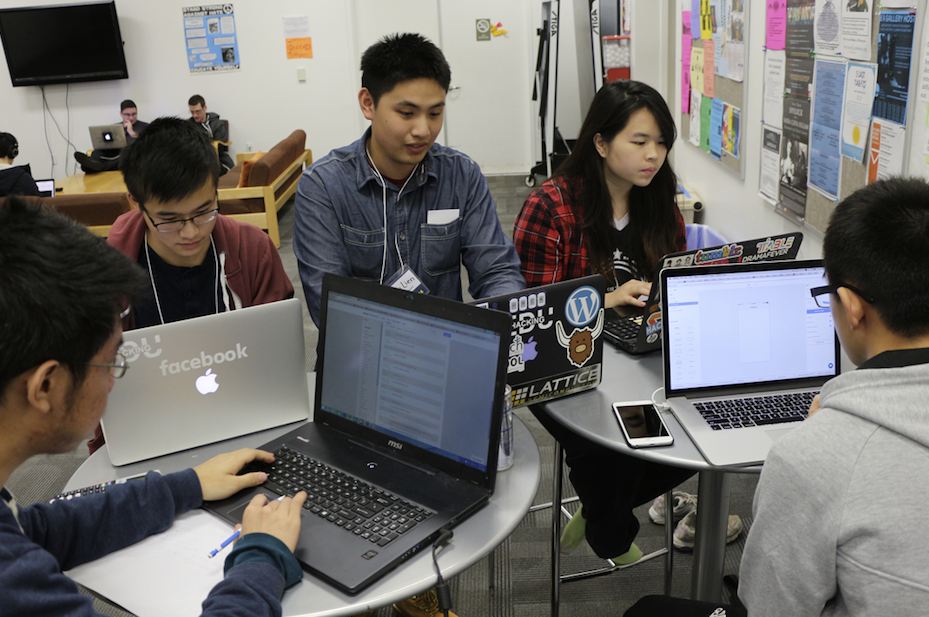 In its third year, the event drew high school and college students from around the state. Spanning a three-day weekend with students working around the clock, Hack UCSC offers cash and prizes to the top four winners in three categories.

A hackathon pulls together teams of developers, designers and entrepreneurs to create novel apps and programs in a short, intensive period of time. Participants pitch an idea, build a team or bring an existing team and idea. Teams strategize their plans, write code and create user interface to bring a new idea to a minimum viable product during the 50-hour time span.

Mark Adams partnered with co-founders Doug Erickson and Brent Haddad to launch the event in 2014 while he was still a UCSC student. More than 100 people showed up the first year. This year, more than 550 people participated.

“Other hackathons are free because they get a ton of sponsor money,” Adams said, adding that those events can have a 50% no-show rate.

“We have a smaller budget, but 80% show and participation rate. The $25 nominal entry fee is considered skin in the game.” Students develop apps or programs in one of three areas:

“We also have a bunch of smaller side projects,” said Adams. “Pebble has an opportunity if you make a novel app for their watch.”

After the Friday kick off, a team of five UCSC computer science students gathered in the lounge to build a new social media analytics app. Using the public information available on Facebook, Twitter, Instagram, Tumblr, a user could watch an aggregate stream of another individual’s activity across all the platforms. Competing in the innovation category, and calling it Bae Watch, each team member planned to focus on a separate social media site, then bring it back together at the end.

“We’re using the Ionic framework, which is a library that lets you code in javascript, and works well for mobile devices,” said Andrew Lien. “You code once in Javascript and it deploys to both iOS and Android at the same time.”

As often happens in development, the team made changes to their initial concept. The final product was mobile app Loop Watch that tracks how far campus shuttle buses are from the user’s location, which won fourth prize in the innovation category.

Seven students from Moorpark College in Southern California made the drive to attend the event.

“A friend here at UCSC has been telling us about it, it was open registration, we said why not and came up here,” said Kellie Skific. She and two others will develop a website in the Tech Cares category.

“We want to have more community involvement,” said Mona Elalami. “My parents are from Palestine, and my mom wanted to mentor and network within the culture to keep the spirit alive.” The team also wanted to learn coding skills in HTML and CSS. 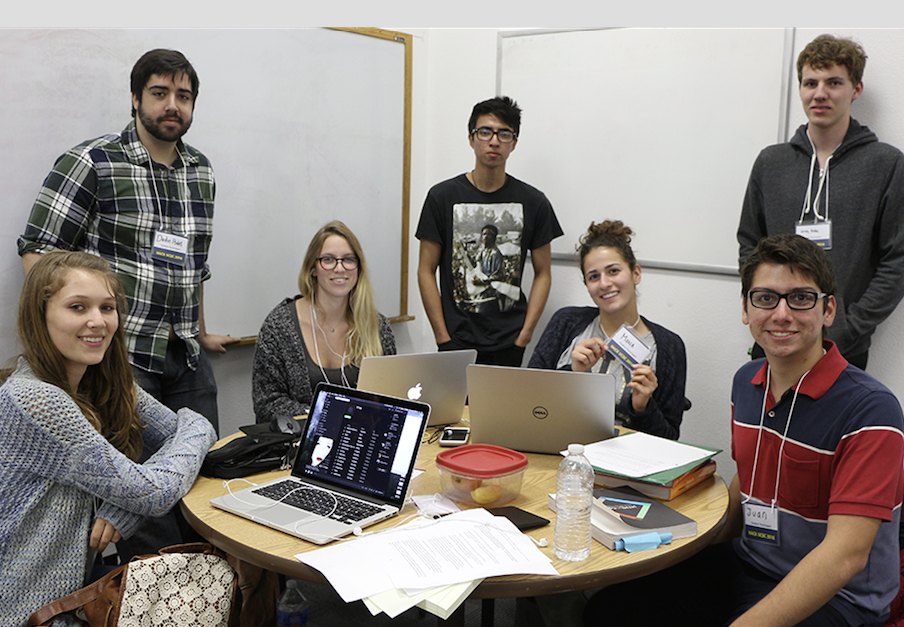 Other members of the team planned to help with coding and design. They will also work on their own project using virtual reality (VR) to create an online multiplayer, stressed-based game with a comedy 80s hacker style theme. “A lot of people are going to enjoy this silly, fun pick up game, you can just jump in there and do it,” said Dustin Podell, “definitely teens and young adults.”

Describing VR gaming as awesome and more interactive, Juan Erazo explained the team’s interest in tackling a VR project for the hackathon. “It’s not a very big field right now, but in the next few years there will be a high demand for developers,” he said. “People who have tried VR actually understand how cool it is.”

The team’s goal for the weekend was to use their completed demo to apply for a grant for newer headsets as a developer kit.

Brian Vallelunga and Bobby Lyons, third year UCSC computer science majors, waited Friday afternoon for their other partner to get off work. Vallelunga attended eight prior hackathons, including Greylock Hackfest, a few in San Francisco, and Hack UCSC twice, winning in 2015.

With the advent of ad blockers, online advertisers are losing millions of dollars. The duo will compete in the innovation category to create Sledge, an ad blocker, by taking apart Google’s ad code and rewriting it.

Main draw may be prizes, but students attend for many reasons

“It’s exciting to see what other people come up with,” she said. “Last year I went for experience, this year I came back because I liked it.” As students apply classroom work to real projects, the hackathon offers opportunities to talk with mentors, people in the field, ask questions, discover different career paths.

“Class work is a lot different. Similar coding languages, but we haven’t designed for an object before. You don’t make useful things until you get to internships,” said Kim.

Students chose to work through the night both nights, or to shoehorn in power naps to stay focused. On the final day and into the home stretch, teams electronically submitted the code for their project, then endured two rounds of judging Sunday afternoon.

As judging wrapped up Sunday afternoon, winners were announced.

“The event was phenomenal, most fun I’ve had in 15 years,” said Sue Carter, Director of the Center for Innovation and Entrepreneurial Development at UCSC. “The students have lots of viable ideas to create sustainable businesses.”

OUR Walmart co-director Andrea Dehlendorf praised the work of the students. “Our goal was to get an empowerment tool into the hands of as many Walmart workers as possible,” she said. Four groups developed apps and Our Walmart Connect won top prize.

“The competition was tight, especially at the top. We were so impressed with all of them,” said Alison Ascher Webber, Ed Tech partner with World Education who judged in the Labor Tech category. Other teams that didn’t win still planned to go ahead with their ideas. “They were that good and viable,” she said.

Melissa Liu, chair of the Baskin Alumni Advisory Council, served as a judge in Tech Cares last year and returned in 2016 to judge in Innovation. “I saw some things that looked very polished. I also saw work students created for the first time in order to learn it, not to win, but cool they would do it.”

A full description of cash awards and prizes is listed at hackucsc.com.

A celebration and look to the future

The Sunday evening awards dinner featured a who’s who of university, city and business leaders. Event co-founder Erickson welcomed the audience and thanked UCSC, the contributing staff and all the sponsors for their part in making the event successful.

Bonnie Lipscomb, Director City of Santa Cruz Economic Development, premiered a new video that showcased working in Santa Cruz. She congratulated all the winners, telling the students how great it is to live and to work in Santa Cruz.

“Our mission is to create a thriving region with quality jobs, excellent education and health care and a high quality of life for all our residents, while preserving the natural beauty and healthy lifestyle we all share.”

He told the gathered audience, formal and informal leaders, they were all needed to fulfill that mission.

Tomer Kagan, CEO of Quixey, in Mountain View, described his time as an undergrad at UCSC. “One of the amazing things about Santa Cruz is that it is a sandbox. You have an unbelievable opportunity to build your future right here,” he said.

“Education isn’t just about learning, education is about doing.”

He asked the winning students to participate in building next year’s event, and he personally committed $10,000 in funding, challenging Bud Colligan to do the same. 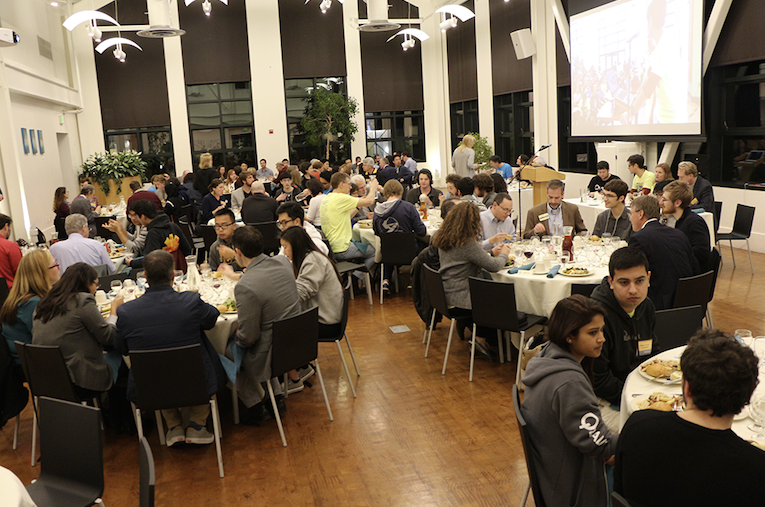