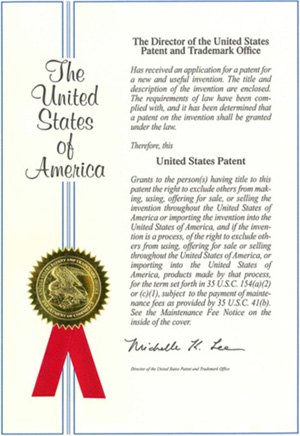 UC Santa Cruz researchers were awarded 26 new patents in the last fiscal year, a record number for the campus. The new patents include novel compounds with potential medical uses, innovations in computer chip architecture, and new methods for genome assembly and analysis of genomic sequencing data.

“Thanks to the outstanding efforts of our campus innovators, this represents a new high water mark for the UCSC campus, 27% more than our previous best of 20 patents in a single year,” said Vice Chancellor for Research Scott Brandt.

Brandt also credited this milestone to the Office of Research’s recent innovation and entrepreneurship initiative, funded by the AB2664 grant from the State of California, and the proactive leadership of the Industry Alliances and Technology Commercialization office led by director of intellectual property management Jeff Jackson and senior intellectual property officer Christopher Reed.

“The quality of the innovation at UCSC is reflected in the fact that about half of these issued patents are licensed to companies working to develop them into products. The majority of those companies are startups based in Santa Cruz,” Jackson said. “While issued patents are one indication of the health of the IP portfolio, another is the number of new inventions disclosed, and the last fiscal year also was an all-time high in new inventions disclosed (up 10% over last year.)”

Several faculty members received multiple patents, including Mark Akeson, professor of biomolecular engineering, with five patents related to nanopore DNA sequencing, a concept invented and pioneered at UC Santa Cruz for analyzing DNA and other molecules as they pass through a tiny pore called a “nanopore.” The technology has been commercialized by Oxford Nanopore Technologies (U.K.), whose cell-phone-sized DNA sequencing device has been used at remote sites such as the Arctic, rural West Africa, and the International Space Station.

Patents with potential applications in clinical medicine include bacterial inhibitors discovered by Victoria Auerbuch Stone, professor of microbology and environmental toxicology, that could lead to the development of new antibiotics effective against multi-drug resistant bacteria.

More information about patents awarded to UCSC researchers is available on the web site of the Inventor Recognition Program, created by the Office of Research to acknowledge researchers on a quarterly basis for their U.S. patent awards and to showcase the groundbreaking research that is conducted on the UCSC campus every day.