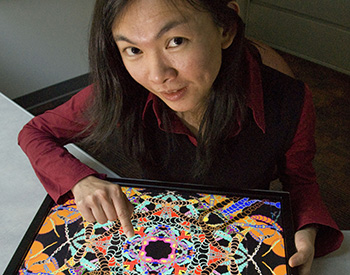 According to some estimates, the global serious game market will exceed $10 billion within the next few years.

The Baskin School of Engineering at UC Santa Cruz is launching the first professional master’s degree program in serious games offered in the United States, with an initial cohort of students starting in fall 2019. Serious games are designed to accomplish a purpose other than pure entertainment and aim to impact measurable social goals.

UC Santa Cruz already offers two of the most highly rated game degree programs in the country: a B.S. in computer game design and M.S. in games and playable media, both in the top 20 of Princeton Review’s Top Game Design Schools.

There are opportunities to study serious games at other universities, but none offer the breadth and focus of the new program at UC Santa Cruz, according to Noah Wardrip-Fruin, professor of computational media. The professional degree in serious games will give students an entry into a rapidly growing industry, he said. According to some estimates, the global serious game market will exceed $10 billion within the next few years.

Based at UCSC’s Silicon Valley Campus in Santa Clara, the serious games program builds on existing expertise at UC Santa Cruz in assistive technologies, games and playable media, digital art and new media, psychology, and other related disciplines. The campus’s professional degree programs are designed to replicate and accelerate the process of learning from experience.

“Our professional programs in games and playable media and serious games are project-oriented and emulations of professional environments,” said Michael John, a teaching professor of computational media who has more than 25 years of industry experience with both serious and entertainment games. “Each quarter you might make three or four games, and they won’t all be good; actually most of them won’t be good, but the process of building lots of little interactive toys and games is how you learn, and that turns out to be a key skill in the workplace.”

Historically, many serious games have focused on education. But Sri Kurniawan, a professor of computational media at UC Santa Cruz, is focusing her research on games to improve health and wellbeing. She sees enormous potential in serious games, particularly for populations with special needs such as people with disabilities, from low socioeconomic or educational backgrounds, and the elderly.

“Rehabilitation for a stroke survivor, for example, can be incredibly tedious,” Kurniawan explained. “It can take years of physical and speech therapy to regain function. The appeal of these games is that they can make it more playful and fun. Speech therapy can take years, and adding instant gratification and high scores can make it much less of a chore and help with compliance and the way people feel about themselves doing it.”

Creating a game for health requires coordination between multiple stakeholders and often very different specialties. UC Santa Cruz has a long tradition of cross-disciplinary symbiosis, making it an ideal place for a serious games program. In addition to education, training, and healthcare, serious games have been applied in areas ranging from political advocacy to crowdsourcing of scientific discovery.

The new program will train students over five academic quarters in six key areas: game design, game technology, eliciting and integrating subject matter knowledge, designing and conducting efficacy measures, effective teamwork, and career planning. It will culminate in a capstone project. The program’s location in the heart of Silicon Valley and the close relationships of faculty with industry will create ample opportunities for students.

Much of the credit for the early emphasis on games at UC Santa Cruz goes to Jim Whitehead, professor and chair of computational media. In 2004, he began developing a program for computer science students who wanted experience with game development. When the campus began offering a B.S. in computer game design in 2006, it was the first program of its kind in the UC system and one of the few in the country.

Students flocked to the program. During the past decade, UCSC alumni have helped create the latest generation of games. Whitehead said he foresees the same thing happening with serious games. Some students currently enrolled in the games and playable media program are already planning to switch to serious games.

“There’s a lot of overlap between serious games and more entertainment platforms,” Whitehead said. “They work with the same programming languages, but there are definitely divergence points.”

Those divergence points provide the rationale for having two separate programs. “If you’re doing a serious game, there’s some sort of outcome expected, and it’s really important to measure whether you’re getting there or not. So there’s an important assessment component,” Whitehead said.

Designing games with assessment built in seems like a subtle distinction but often requires an entirely different design philosophy. Another reason for separate programs, according to Whitehead, is that the students interested in them are quite different.

“They’re just not as into entertainment games as the other students,” he said. “They’re much more motivated by real-world concerns, and there’s value in collecting people like that together so they don’t feel marginalized and so they can exchange information and share their enthusiasm.”

The traditional gaming community can seem clannish and forbidding for outsiders to break into. Serious games, as an entirely new field, presents an opportunity for a much broader segment of the population to apply the tools created for gaming to entirely new problems.

Edward Melcer, assistant professor of computational media, teaches a required course on the fundamentals of serious games. “So many people see the potential of games to do something important, but shy away,” Melcer said. “People think they have to have all this technical knowledge or be a hardcore gamer to do serious games, but we don’t require that. We want people with passion, people who want to do something for their audience.”

More information about the M.S. in Serious Games at UC Santa Cruz is available online at gpm.soe.ucsc.edu/admissions.